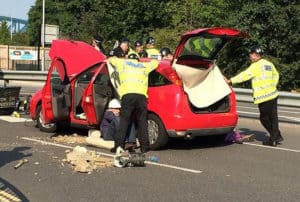 Congratulations to the ten anti-nuclear protestors in Plymouth who blockaded Devonport naval base this morning.

The activists chained themselves to their parked car in front of the entrance to the dockyard at 6am. The action was in protest against the work on nuclear-armed submarines which takes place at the base. The Vanguard-Class submarines which carry the UK’s Trident missiles are refitted at Devonport Dockyard, which has been the focus for many local protests over the years.

“I’m here today because I believe the work that goes on here in refitting Britain’s Nuclear weapons system is immoral and dangerous.

“Trident could never be used legally as its use would constitute a war-crime. The government is trying to spend in excess of a £100 Billion pounds of taxpayer money renewing a global terror weapon which can never be used.

“Why should we live with austerity just so that our government can throw its weight around the world?

“The money earmarked for Trident would be better spent on public services such as education and healthcare, all of which are suffering due to the Condem coalition spending cuts.”

Read further reports of the protest: