Can you believe that if you were given a budget of just under 5% of the cost of replacing Trident you can eradicate homelessness in 10 years?

There are 236,000 people in Britain living on the streets, in cars, tents, shelters or in “unsuitable” temporary accommodation. Homeless people die on the streets every week.

Homelessness is a crisis that has a solution, yet governments ignore it.

Crisis, the national charity for homeless people, has a plan which would cost £10 billion, a fraction of the £205 billion it will cost to replace Trident.

The plan involves building 100,000 social homes each year, as well as offering specialised long-term support for those who have been homeless.

It is a very detailed and credible plan, drawn up with the help of the Chartered Institute of Housing, Heriot-Watt University, the National Housing Federation and accountants PricewaterhouseCoopers, as well as frontline workers and people who have been homeless themselves.

The authors of the plan say everyone in Britain would have a stable home within 10 years if its measures were adopted in full. 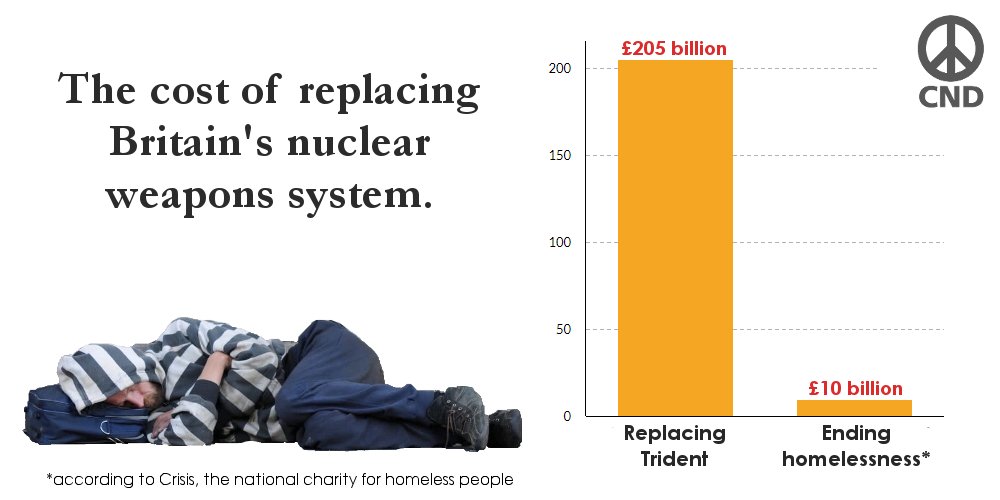 We don’t expect that today’s budget will include the £10 billion needed to end homelessness. We do expect the ongoing spending of £205 billion to replace an utterly useless weapon of mass destruction to continue.

Doesn’t that reveal once again the upside-down priorities of our government and the urgent need for our movement to secure something better? Nuclear weapons not only pose a grave danger to life on our planet, they are sapping the resources we need to build a peaceful and prosperous society for all.

Trident must be scrapped.

Join CND to make it happen.