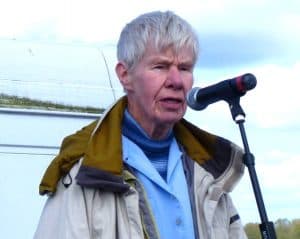 CND mourns the loss of Helen John, one of the peace movement’s most exceptional figures. From protesting against cruise missiles at Greenham Common in the 1980s to her anti-drones protest at RAF Waddington in 2013, she was a force of nature who inspired so many from the new generations coming into action against nuclear weapons, militarism and war.

Helen served as a Vice-Chair of CND, from 2001 to 2004, the pivotal dangerous years of the ‘war on terror’ and the illegal war on Iraq. With her extensive political experience, and her wisdom based on years of diverse experience in the peace movement, Helen played a crucial role, and was present, on behalf of CND, at the founding meeting of the Stop the War coalition in October 2001.

Helen was also a dedicated direct activist, challenging the state over its militarism and asserting her right to protest. Amongst many other arenas she was active at the Womenwith Hill women’s peace camp, as well as being prominent in the Global Network against Nuclear Power and Weapons in Space.

CND General Secretary, Kate Hudson, paid tribute on hearing of Helen’s death: ‘It is hard to put into words the debt that the peace movement owes to Helen, a remarkable woman who put the cause of peace front and centre in her life, with an incomparable force – but also with a remarkable compassion and humanity. We will miss Helen, her drive, her love, her anger. We remain inspired by her and will work to fulfil our shared goals – a world without militarism and war.’

Our thoughts are with Helen’s family and loved ones.