The militarisation of space has become an increasing concern for peace activists over the past couple of years, not least following US President Donald Trump’s creation of a ‘Space Force’. Billions of pounds are being spent by multiple countries on militarising space – on satellites, ground-based stations and new technologies such as armed drones, controlled through satellites. Warfare has become almost totally dependent on space technology.

Every year, the Global Network against Weapons and Nuclear Power in Space – of which CND is a member – calls a Keep Space for Peace week of actions. This year it is taking place between October 3rd and October 10th, and there are many events happening across the UK and internationally.

You may be interested in this new booklet from the US group Beyond Nuclear, which examines the US Space Force and the dangers of nuclear power and nuclear war in space:

CND Chair Professor Dave Webb is the convenor of the Global Network. He has written a blog for CND with the latest news on “the world’s newest war-fighting domain”: 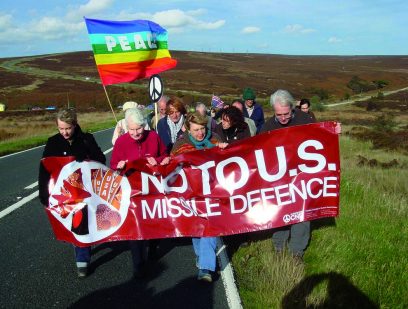 Find out more about missile defence
See Yorkshire CND's campaign
Your support goes a long way!
Donate
Get the latest updates on our campaign