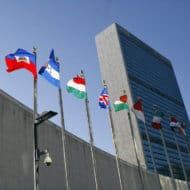 Work is underway to build four submarines for a new nuclear weapons system to replace Britain’s current one, Trident. But all the facts continue to stack up against Britain’s nuclear weapons system, irrespective of this shameful vote, not least its legality. The UK government’s decision in 2021 to increase the size of its nuclear arsenal ends three decades of gradual reductions and again, shows a further clear breach of international law.

The use of nuclear weapons would be illegal under international law in almost all conceivable circumstances, as attested by several international declarations and conventions.

The United Nations General Assembly has previously sought to clarify the legal status of nuclear weapons, asking the ICJ whether the threat or use of nuclear weapons in any circumstances is permitted under international law.

In response, the ICJ presented an Advisory Opinion in 1996. This is the one of the few authoritative judicial decisions on the legality of nuclear weapons under international law. The majority of the 14 ICJ judges concluded:

‘the threat or use of nuclear weapons would generally be contrary to the rules of international law applicable in armed conflict, and in particular the principles and rules of humanitarian law.’

Three judges actually favoured a stronger decision, that nuclear weapon use is illegal under all circumstances. One of these, Judge Stephen M. Schwebel, remarked in his dissenting opinion:

‘It cannot be accepted that the use of nuclear weapons on a scale which would – or could – result in the deaths of many millions in indiscriminate inferno and by far-reaching fallout, have pernicious effects in space and time, and render uninhabitable much or all of the earth, could be lawful.’

The Hague Convention (1907) is a treaty that predates the invention of nuclear weapons. It prohibits ‘employ[ing] arms, projectiles, or material calculated to cause unnecessary suffering’. Nuclear weapons are unique in their devastation. The heat flash from a nuclear explosion literally vaporises all human tissue. People inside buildings or otherwise shielded will be indirectly killed by the blast and heat effects as buildings collapse and all inflammable materials burst into flames. Those in underground shelters who survive the initial heat flash could die as all the oxygen is sucked out of the atmosphere. Outside the area of total destruction, others will suffer from fatal burns, will be blinded, bleeding from glass splinters and will have suffered massive internal injuries.

Further expanding on the ‘unnecessary suffering’, the effects of radiation from the explosion will last decades after the initial exposure. Radiation-induced cancers will affect many, often decades later. The children of those exposed to radiation are statistically more likely to be born with abnormalities and suffer from leukaemia.

Nuclear weapon use would violate rights enshrined in the Universal Declaration of Human Rights (1948). Nuclear weapons directly contravene Article 3, the ‘right to life, liberty and security of person’.

The nuclear fallout would violate Article 25, the ‘right to a standard of living adequate for the health and well-being of himself and of his family’.

The Red Cross has stated it would not be possible to provide an adequate humanitarian response to a nuclear attack. The death rate will be higher than in a normal disaster since most emergency services will be incapable of responding due to their equipment being destroyed and staff killed. The sheer scale of the casualties would overwhelm any country’s medical resources. There is currently no international plan in place to deliver humanitarian assistance to survivors in the case of a nuclear attack. Most casualties would receive at best minimal, palliative treatment. The best they could hope for would be to die in as little pain as possible

The Protocols Additional to the Geneva Convention

Protocol I to the Geneva Convention has several articles relevant to nuclear weapon use. Geneva Convention Protocol I (1977) states that ‘the civilian population shall not be the object of attack’. Article 51 of the Protocol also states that ‘indiscriminate attacks are prohibited’. The very nature of a nuclear weapon contravenes these protocols – it is impossible to use on selectively on a single military target. Civilian casualties would be unavoidable.

To give some idea of the effects, the Chernobyl nuclear plant accident caused the contamination of five million acres of land in Ukraine. Research by the International Red Cross shows the effect of a ‘limited’ nuclear war. The disrupted global climate would have an overwhelming impact on food production meaning up to a billion people around the world would face starvation.

The UK has agreed to disarm its nuclear arsenal as a signatory to an international treaty. The continued possession of Trident and the intention to remain nuclear-armed for decades to come means Britain is not living up to its obligations.

Britain is a signatory to the 1968 nuclear Non-Proliferation Treaty (NPT). Article VI of the NPT commits each of the ‘official’ nuclear states (Britain, United States, Russia, China and France) to eliminate its nuclear arsenal, while the other 185 signatories commit to remaining nuclear-weapon free:

‘Each of the Parties to the Treaty undertakes to pursue negotiations in good faith on effective measures relating to cessation of the nuclear arms race at an early date and to nuclear disarmament.’

Although the UK government has almost halved its nuclear warhead stockpile since signing the treaty, it still possesses over 200 nuclear bombs and is currently building the submarines for a brand new nuclear weapons system, with the intention of remaining nuclear-armed until at least 2060. This will be almost a 100 years since signing a treaty agreeing to disarm ‘at an early date’!

To compound matters, the UK government announced in March 2021 it would be increasing the size of its nuclear arsenal by over 40%. Following this unexpected and unwelcome announcement, CND commissioned a Legal Opinion authored by renowned experts Professor Christine Chinkin and Dr Louise Arimatsu. Their findings show a clear breach of Article VI of the nuclear Non-Proliferation Treaty.

The Review Conferences of the NPT, held every five years, have failed to break the logjam and make genuine progress towards nuclear disarmament, largely because of obstruction by the nuclear weapons states. The most recent Review Conference in May 2015 failed to reach any agreement.

It is in this context of frustration that the international initiative to secure a global ban on nuclear weapons began.

Following various conferences and negotiations, a new treaty entered into force in January 2021 which will outlaw nuclear weapons across much of the globe. For the first time an international treaty has ruled that nuclear weapons are illegal.

States parties to the Treaty on the Prohibition of Nuclear Weapons (TPNW) are banned from developing, testing, producing, manufacturing, acquiring, possessing, stockpiling, transferring, using or threatening to use nuclear weapons. It also makes it illegal to assist or encourage anyone to engage in these activities.

The UK government refused to participate in the negotiations and now refuses to sign – or even engage with – the treaty.

CND is lobbying the British government to sign and ratify the treaty and work towards the global elimination of nuclear weapons. The UK can sign up prior to disarming if it removes its nuclear weapons from operational status and agrees a transition plan for disarmament.

The UK government has repeatedly said that it shares CND’s goal of a nuclear weapons-free world but its refusal to engage with this disarmament initiative raises questions about its commitment to international obligations to get rid of nuclear weapons.

Nuclear weapons have no legitimate purpose: their use would be illegal under almost every conceivable circumstance, as huge numbers of civilian casualties would be unavoidable. That is why continued possession of nuclear weapon means that Britain is contravening international rulings and declarations.

The UK government continues to state its commitment to multilateral nuclear disarmament while refusing to actually take any concrete step forward.

Replacing the Trident nuclear weapons system – and actually increasing the number of nuclear warheads in its arsenal – demonstrates a failure of vision on the part of our government. It has failed to notice that the overwhelming majority of states in the world continue to insist that we comply with our international treaty obligation to disarm. Far from enhancing our status, our continued failure to disarm does us enormous harm in the eyes of the global majority.

Scrapping Trident remains an urgent priority for CND. We want to see a world without nuclear weapons, and stopping Trident is part of that process.