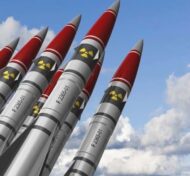 Approximately 150 American B-61 nuclear gravity bombs are stationed in five countries in Europe: Belgium, Germany, the Netherlands, Italy and Turkey. While the governments of these countries have never officially declared the presence of these weapons, individuals such as the former Italian President and former Dutch prime minister have confirmed this to be the case.

The nuclear sharing arrangement is part of the North Atlantic Treaty Organization’s (NATO) defence policy. In peace time, the nuclear weapons stored in non-nuclear countries are guarded by US forces, with a dual code system activated in a time of war. Both host country and the US would then need to approve the use of the weapons, which would be launched on the former’s airplanes.

When these bombs were initially deployed, the original targets were eastern European states. But as the Cold War ended, and these states became part of the European Union and in some cases NATO itself, the practice has become provocative, destabilising and dangerous.

There is strong opposition to these weapons being sited in Europe, including from some of the host nation governments. Germany, Belgium and the Netherlands have all, unsuccessfully, called for the removal of US nuclear weapons from their countries.

Where are the bombs?

Up to 20 nuclear bombs are stored at each of the following: the Kleine Brogel air base in Belgium, the Büchel Air Base in Germany, and the Volkel air base in the Netherlands.

Around 70 bombs are stored in Italy, distributed between the Aviano and Ghedi air bases.

100 of these bombs had been stored at RAF Lakenheath in East Anglia, but were removed in 2008, following persistent popular protest at the airbase. This ended 50 years of US nuclear weapons in Britain.

An estimated 50 bombs are stored at the Incirlik air base in Turkey. The wisdom of storing such a large nuclear weapons stockpile in such a volatile region must be in doubt. Particularly worrying is that the base is less than 70 miles from war-torn Syria.

While Turkey is officially an ally of the US, and a member of NATO, increased tensions in recent months have highlighted the potential risks of the current situation. In December 2019, Turkish President Recep Tayyip Erdogan even threatened to close the base, which would leave the status of the nuclear weapons unclear.

Having US nuclear bombs in Europe conflicts with the legal obligations of the signatories to the nuclear Non-Proliferation Treaty (NPT). Articles 1 and 2 of the NPT forbid the transfer of nuclear weapons to non-nuclear weapon states, but Belgium, Germany, the Netherlands, Italy and Turkey are all non-nuclear.

The US has argued that transfer and control to the non-nuclear weapon states does not occur until wartime, when the treaty no longer applies; but the controversy continues.

At the 2018 NATO summit, the alliance declared that NATO’s ‘deterrence posture’ relies on the US nuclear weapons deployed in Europe.

In 2013 the US administration initiated a Life Extension Programme for the current B61 models deployed in Europe, extending their life by up to 30 years and significantly enhancing their capabilities. This new model, the B61-12, can be accurately steered, is earth-penetrating and is due by 2020. The yield of the bomb can be adjusted, making it more usable, and it is expected to cost over $8 billion, marking the US’ ongoing commitment to the nuclear-sharing arrangement.

Moreover, Belgium, Germany, Italy and the Netherlands have upgraded, or are planning to upgrade, their fighter-bomber planes.

Together, this represents a significant enhancement of US nuclear capability in Europe.

The US should withdraw all tactical nuclear weapons from Europe. This would ensure compliance with the NPT (Articles I and II). Moreover, the presence of these weapons endorses the dangerous concept that non-nuclear countries may adopt nuclear roles on behalf of nuclear powers.

This could also pave the way for further negotiations on nuclear weapons reductions with Russia and thereby potentially impacting on multilateral negotiations. Withdrawal would eliminate the risks of accident or hostile attack for areas surrounding the bases where US bombs are deployed.

A withdrawal of all US/NATO nuclear weapons from Europe would have a constructive impact on international disarmament.