One of the most widely known symbols in the world, in Britain it is recognised as standing for nuclear disarmament – and in particular as the logo of the Campaign for Nuclear Disarmament (CND). In the United States and much of the rest of the world it is known more broadly as the peace symbol.

It was designed in 1958 by Gerald Holtom, a professional designer and artist and a graduate of the Royal College of Arts. He showed his preliminary sketches to a small group of people in the Peace News office in North London and to the Direct Action Committee Against Nuclear War, one of several smaller organisations that came together to set up CND. 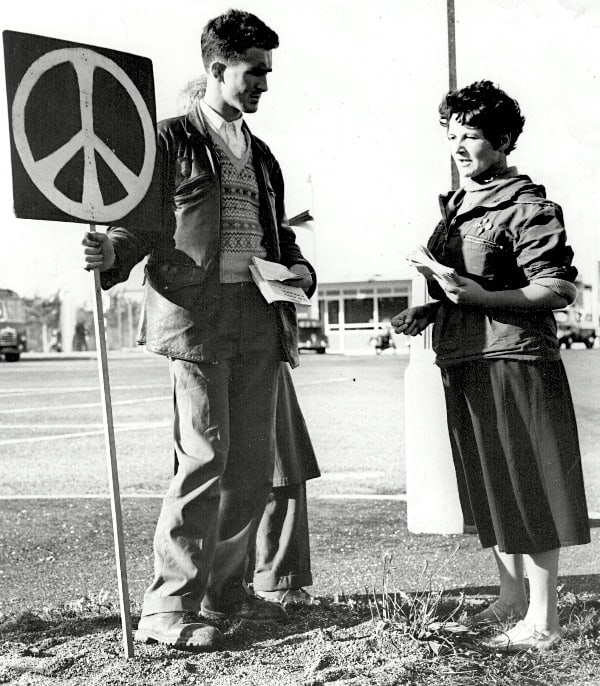 The Direct Action Committee had already planned what was to be the first major anti-nuclear march, from London to Aldermaston, where British nuclear weapons were and still are manufactured. It was on that march, over the 1958 Easter weekend that the symbol first appeared in public. Five hundred cardboard lollipops on sticks were produced. Half were black on white and half white on green. Just as the church’s liturgical colours change over Easter, so the colours were to change, “from Winter to Spring, from Death to Life.” Black and white would be displayed on Good Friday and Saturday, green and white on Easter Sunday and Monday.

The first badges were made by Eric Austin of Kensington CND using white clay with the symbol painted black. Again there was a conscious symbolism. They were distributed with a note explaining that in the event of a nuclear war, these fired pottery badges would be among the few human artifacts to survive the nuclear inferno.

(These early ceramic badges can still be found and one, lent by CND, was included in the Imperial War Museum’s 1999/2000 exhibition From the Bomb to the Beatles.) 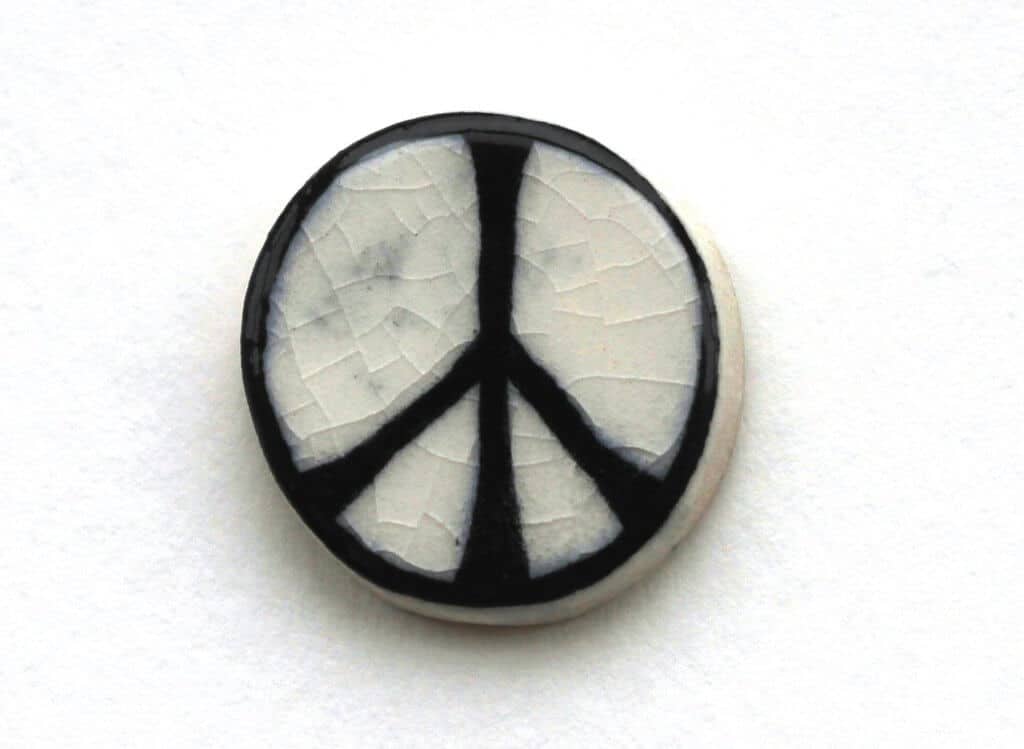 CND still makes badges today, which can be purchased here; all proceeds go towards helping the campaign against nuclear weapons.

What does it mean?

Gerald Holtom, a conscientious objector who had worked on a farm in Norfolk during the Second World War, explained that the symbol incorporated the semaphore letters N(uclear) and D(isarmament).

He later wrote to Hugh Brock, editor of Peace News, explaining the genesis of his idea in greater, more personal depth:

I was in despair. Deep despair. I drew myself: the representative of an individual in despair, with hands palm outstretched outwards and downwards in the manner of Goya’s peasant before the firing squad. I formalised the drawing into a line and put a circle round it.

Eric Austin added his own interpretation of the design: the gesture of despair had long been associated with the death of Man and the circle with the unborn child.

Gerald Holtom had originally considered using the Christian cross symbol within a circle as the motif for the march but various priests he had approached with the suggestion were not happy at the idea of using the cross on a protest march. Later, ironically, Christian CND were to use the symbol with the central stroke extended upwards to form the upright of a cross.

This adaptation of the design was only one of many subsequently invented by various groups within CND and for specific occasions – with a cross below as a women’s symbol, with a daffodil or a thistle incorporated by CND Cymru and Scottish CND, with little legs for a sponsored walk etc. Whether Gerald Holtom would have approved of some of the more light-hearted versions is open to doubt.

There have been claims that the symbol has older, occult or anti-Christian associations. In South Africa, under the apartheid regime, there was an official attempt to ban it. Various far-right and fundamentalist American groups have also spread the idea of Satanic associations or condemned it as a Communist sign. However the origins and the ideas behind the symbol have been clearly described, both in letters and in interviews, by Gerald Holtom. His original, first sketches are now on display as part of the Commonweal Collection in Bradford.

Although specifically designed for the anti-nuclear movement it has quite deliberately never been copyrighted. No one has to pay or to seek permission before they use it. A symbol of freedom, it is free for all. This of course sometimes leads to its use, or misuse, in circumstances that CND and the peace movement find distasteful. It is also often exploited for commercial, advertising or generally fashion purposes. We can’t stop this happening and have no intention of copyrighting it. All we can do is to ask commercial users if they would like to make a donation. Any money received is used for CND’s peace education and information work.