Please note that some changes to CND Council were ratified at the winter council session in November 2011 (this revised council list is above). For a list of those originally elected at CND Conference, please click here.

This year’s conference saw a Day of Action at Menwith Hill (more information below) on Sunday 16th October. This event was organised by Yorkshire CND as part of ‘Keep Space for Peace 2011’. 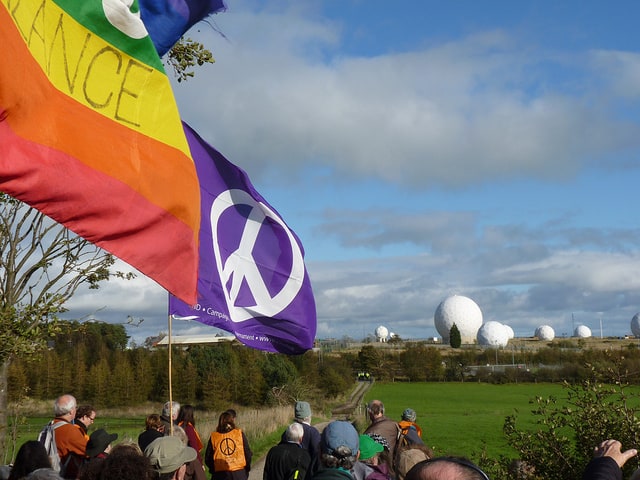 Clusters of enormous radomes (giant golf balls which cover the satellite dishes) mark out Menwith Hill, the US spy base set in an Area of Outstanding Natural Beauty in Yorkshire. The base is run by the US National Security Agency (NSA) and is part of a global network of bases used to spy on all international telecommunications. For the US it is vital in intelligence-gathering necessary for any US-led military attack and is part of the US missile ‘defence’ system. Yet it is operates outside US law and is not accountable under British law.

For these reasons, on the crisp, sunny day of 16th October 2011, around 70 CND members and supporters joined together there for a Day of Action. This included a demonstration, peace picnic and walk around part of the base to view the radomes. CND Chair Dave Webb handed in a letter to the RAF Base Commander (whose role is ‘to provide advice to the US Base Commander’ there). Anne Lee, a long-time dedicated and knowledgeable activist against the base, told how the different areas of the base were used. On many occasions she has managed to break into the base and gather useful information about its secret workings.