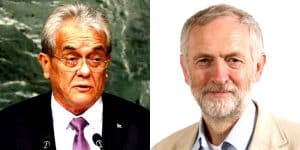 Today CND remembers Tony de Brum, who served as the Marshallese Foreign Minister, and later Minister in Assistant to the President, and devoted his life to campaigning for justice for Marshall Islanders whose lives were destroyed by nuclear weapons testing. At nine years old, Tony witnessed the US 1954 Bravo test from a fishing boat two hundred miles away, an explosion a thousand times more powerful than that which killed thousands in Hiroshima in 1945. Blinded by the light of the bomb, and then covered in white ash, Tony’s experience became a symbol of the damage caused to innocent civilians by a supposedly ‘cold’ war. Deeply affected by what he saw, Tony fought tirelessly for justice for those living in the Bikini Atoll killed and displaced by the nuclear tests.

“Tony was a truly wonderful man. He was Foreign Minister of the Marshall Islands which had been devastated by US testing and witnessed some of the atmospheric nuclear tests as a youngster.

“He spearheaded the recent legal action against the US and other nuclear weapons states internationally and he won a huge amount of support at the UN General Assembly. My deepest sympathies to his family and the Marshallese people on their loss and I pay tribute to his humanity and bravery.”