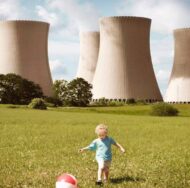 Nuclear power: not the answer to climate change

In the midst of both a climate crisis and energy crisis, the calls for increased production of nuclear power are getting louder. But this would be a mistake.

Nuclear power is not the answer to climate change. Instead, CND calls for an end to its production – a technology that is dirty, dangerous and economically unsustainable. Nuclear power burdens future generations with a potential human and environmental disaster that is not compensated for by the expensive electricity produced.

Renewable energy sources offer a clear alternative to nuclear. If the billions of pounds spent subsidising the nuclear industry were to be invested developing these technologies instead, we could soon have enough secure and clean energy sources from renewables while creating thousands of new jobs.

Introduction
The removal of the UK’s cap on energy prices in April 2022 has impacted millions of people, who are now struggling to pay higher energy bills. The war in Ukraine has had a further effect on energy supply, as has efforts to combat the climate crisis.

In response, the government published a new energy strategy in April 2022 which outlined plans to build up to eight new nuclear reactors

But this strategy is misguided – nuclear energy is not the answer to our current crisis, or climate change on a wider level.

We need a quicker solution
Any new nuclear projects announced – if they even go ahead – would take decades to build. But we need an answer to the climate crisis now.

If nuclear power capacity was doubled worldwide by 2050, 37 new nuclear reactors would need to start producing energy every year until then. For reference, less than 10 have come online per year for the last decade. And even if this hugely ambitious – or more likely, impossible – scenario was realised, it would only result in a 4% reduction in emissions.

Nuclear waste
CND opposes the production of nuclear power for many reasons, one being the large amounts of radioactive waste produced. There is still no safe, long-term UK solution for dealing with radioactive nuclear waste and yet the government wants to produce more with no answer in sight.

The majority of Britain’s nuclear waste is currently held at Sellafield in Cumbria, a site containing over a hundred tonnes of the most toxic substances ever created. The government plans to bury this waste deep below ground for tens of thousands of years, in what it calls a geological disposal facility (GDF).

The government has been trying – without success – for years to find an area of the UK where it would be geologically suitable to build a GDF and where the local community is willing to host it.

Nuclear waste is a problem that the nuclear industry has failed to consider seriously for over sixty years, but one that can no longer be left for future generations.

Impact on environment
The United Nations Intergovernmental Panel on Climate Change (IPCC) has confirmed that nuclear energy has negative environmental impacts, such as on water security.

Alternatives exist
Renewable energy sources have the potential to supply all our energy needs, with the right support and investment.

Energy from renewable sources such as solar and wind have become increasingly more efficient, cheaper and easier to produce. The UK produced more electricity from renewables than fossil fuels the first time in 2020, with experts predicting the trend would continue.

Since 2009, cost estimates for large-scale solar production dropped by 90% and wind production by 70%, while nuclear power production increased by 33%. In fact, solar and wind are now the cheapest bulk power sources in 91% of the world, and the UN’s International Energy Agency predicts renewables will generate 90% of all new power in the coming years.

And this is despite a noticeable lack of support from the government. In the past few years, it has withdrawn support for new onshore windfarms, withdrawn subsidies from solar, taxed renewables and failed to develop tidal power and to encourage energy efficiency measures including home insulation.

These policies have led MPs and the UK’s environmental and spending watchdogs to highlight how the stringent and needless restrictions on the renewables sector has created a hostile environment to investment in renewables across the board. If billions of pounds were to be invested in the UK developing these technologies rather than subsidising the nuclear industry, we could soon have enough secure and clean energy sources from renewables while creating thousands of new jobs.

Climate impact
On top of not actually being the answer to the climate crisis, nuclear power plants pose a huge threat in the context of the effects of climate change. As extreme climate events become the norm, current defences become useless, most particularly in the case of coastal sites. Rising sea-levels, and the ensuing increase in storms, could compromise the operational safety and viability of coastal nuclear plants. 41% of nuclear plants worldwide are on the coast.

There will also be climate-related issues for inland nuclear sites, with the risk of wildfire and flooding increasing, as well as the fact that ebbing river flows and raised water temperatures will have an impact on reactor cooling and discharge.

The potential consequences of something going wrong with a nuclear power plant could be catastrophic. Nuclear may be on the front-line of climate change – but not in a good way.

Small Modular Reactors
As well as developing new traditional nuclear sites, the government wants to produce energy from Small Modular Reactors (SMR). SMRs are smaller versions of nuclear reactors and are intended to be mass produced off-site and then transported, rather than a large construction project such as Hinkley Point C.

But SMRs can produce more nuclear waste than conventional reactors per unit of electricity. It is also an unproven and untested technology that will still cost the taxpayer unspecified – and likely large – amounts of money.

They are also highly unlikely to help with climate change, as the nuclear industry as a whole has a relatively large carbon footprint compared to renewable sources.

Conclusion
The UK government should announce an immediate programme to phase out existing nuclear power plants and cancel any plans for future investment in the industry.

Not only do renewables ensure the UK will meet its climate change commitments safely, they will be significantly cheaper for consumers, won’t contribute to nuclear weapons technologies and won’t produce hazardous, needless radioactive waste.

Nuclear power is not the solution to climate change. We need a safe, genuinely sustainable, global and green solution to our energy needs, not a dangerous diversion like nuclear power. 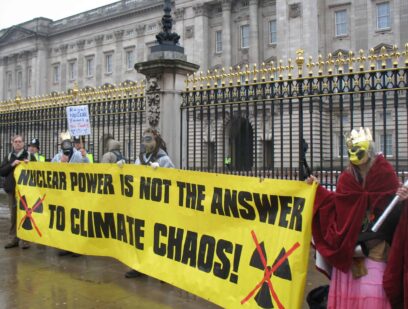