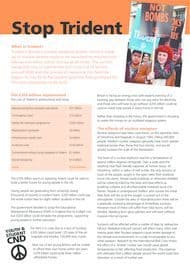 Young people face a bleak future because of massive student debts, a struggling NHS and the threat of climate change. Yet, the government will be spending £205 billion on a new but outdated nuclear weapons system. This money should instead be spent on jobs, homes, education and health; improving the lives of future generations.

Nuclear weapons threaten our future. While today’s government is making the decision to replace Trident, it is our generation who will be stuck with a dangerous weapon and left to foot the bill for it.

Trident is Britain’s nuclear weapons system, which is made up of nuclear bombs ready to be launched on missiles from submarines which patrol the sea at all times. The current Vanguard class of submarines will come out of service around 2030 and the process of replacing this fleet has begun. In July 2016, Parliament gave the final go-ahead for the new submarines to be built.

The cost of Trident is astronomical and rising. The £205 billion spent on replacing Trident could be used to build a better future for young people in the UK.

Young people are graduating from university owing thousands of pounds in student loans. £205 billion could pay the entire tuition fees for eight million students in the UK.

The government decided to scrap the Educational Maintenance Allowance (EMA) in England due to budget cuts but £205 billion could reinstate the programme, supporting young people in further education.

Nine out of ten young Britons will be unable to afford their own home within ten years. £205 billion could build three million affordable homes.

Britain is facing an energy crisis with experts warning of a looming gap between those who can pay extra for electricity and those who will have to go without. £205 billion could be used to install solar panels in every home in the UK.

Rather than investing in the future, the government is choosing to waste this money on an outdated weapons system.

The effects of nuclear weapons

Nuclear weapons have been used twice, on the Japanese cities of Hiroshima and Nagasaki in August 1945, killing 340,000 people. Modern nuclear weapons generally have much greater explosive power than those first two bombs, and would greatly increase the scale of the devastation.

The heart of a nuclear explosion reaches a temperature of several million degrees centigrade. Over a wide area the resulting heat flash literally vaporises all human tissue. At Hiroshima, within a radius of half a mile, the only remains of most of the people caught in the open were their shadows burnt into stone. People inside buildings or otherwise shielded will be indirectly killed by the blast and heat effects as buildings collapse and all inflammable materials burst into flames. People in underground shelters who survive the initial heat flash will die as all the oxygen is sucked out of the atmosphere. Outside the area of total destruction there will be a gradually increasing percentage of immediate survivors. However most of these will suffer from fatal burns, will be blinded, bleeding from glass splinters and will have suffered massive internal injuries.

Survivors will be affected within a matter of days by radioactive fall-out. Radiation-induced cancers will affect many, often over twenty years later. Nuclear weapons cause severe damage to the climate and environment on a scale incomparable to any other weapon. Research by the International Red Cross shows the effect of a ‘limited’ nuclear war would cause global temperatures to fall, affecting food production. The organisation estimates that a billion people around the world could face starvation as a result of nuclear war.

Why we must cancel the replacement

Even if they aren’t used, nuclear weapons pose a risk to our safety. Accidents involving nuclear weapons happen and it is only down to luck that more people haven’t been injured or even killed.

In June 2016, a Trident missile veered off course during a test. This incident was hidden from parliament before they voted on whether to replace the nuclear submarines. This is not an isolated incident with several misfires since testing began. Plus there have been other accidents involving Trident. In 2009 for example, a British nuclear-armed submarine collided with a French nuclear-armed submarine.

Nuclear bombs are transported on our roads in convoys every few weeks. These convoys take Trident warheads between the factory where they are made and serviced near Reading to Scotland, where they are based. The Ministry of Defence has confessed to eight accidents involving the convoys between 1960 and 1991 and a further 180 safety incidents between 2000 and 2016. Incidents include convoys getting lost, brakes failing or even crashes. This is a liability which puts the lives of UK people in danger.

Britain has agreed to ‘general and complete disarmament’ under the nuclear Non-Proliferation Treaty (NPT) to which it is party. It agreed to this in 1970, yet decades later it continues to maintain its nuclear arsenal with no sign of attempting to abide by this goal it had promised decades ago. This is unacceptable behaviour and we have had enough.

Doesn’t even keep us safe

Trident is vulnerable to emerging underwater drone technology; one of the unique selling points – that they are undetectable under water – soon won’t exist. The system is also vulnerable to cyber attack.

The continued possession of UK nuclear weapons based on the justification that it keeps the UK safer encourages other countries to pursue nuclear weapons, thereby making the world less safe. We have a responsibility as a nuclear-armed nation to recognise the reality of these weapons – dangerous, militarily useless and costly – and to help create a world free from the threat of nuclear weapons.

The UK is in the minority as a nuclear-weapons country. Only nine countries have them, almost 200 do not.

Over the last few years an international movement of countries that want to rid the world of nuclear weapons has resulted in the UN agreeing to negotiate a global nuclear weapons ban in 2017, with 123 countries supporting this initiative.

Youth and Student CND is the section of the Campaign for Nuclear Disarmament for anyone under the age of 25 or in education. There are many ways to get involved with us:

The list is endless, just get in touch and together we can Stop Trident.