One of the victims of the Hiroshima bombing was a child named Sadako Sasaki. She was just two years old when the bomb was dropped on her hometown of Hiroshima. As she was eating her breakfast, Sadako was blown outside by the explosion, but wasn’t hurt.

Nine years later, Sadako was growing up and particularly enjoyed running. But one day, when she was twelve years old, she noticed a strange swelling on her body and was soon hospitalised with leukaemia. Soon after she moved into the hospital, Sadako’s father told her a Japanese legend: that if you folded one thousand ‘orizuru’ (paper cranes) you would be granted a wish.

Sadako began to fold the paper cranes. Despite being very tired and in a lot of pain, she managed to fold 1000 cranes. Tragically, she passed away within months, but her story has become a global symbol of peace, and a reminder of the human tragedy and unimaginable suffering that today’s nuclear weapons threaten.

In 1958, a statue of Sadako holding a life-size golden crane, was built in Hiroshima Peace Park. It is called the Children’s Peace Monument. At the bottom of the statue there is a plaque that says: ‘This is our cry, this is our prayer, peace in the world.’ 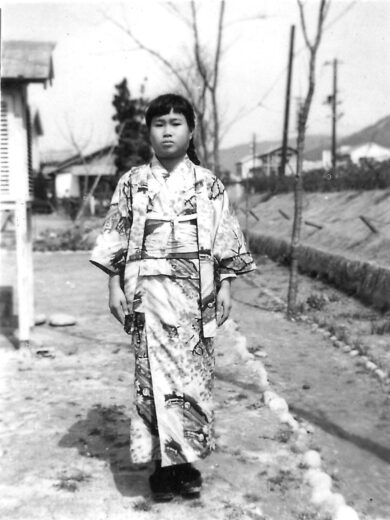 This is Sadako in 1955, when she was ill. Image provided by Sadako’s brother, Masahiro Sasaki.

Many people fold paper cranes around the anniversaries of the bombings to remember victims such as Sadako. 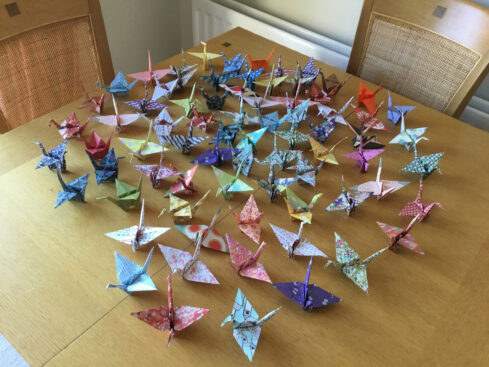