There are five officially declared nuclear weapon states in the world:

These states are signatories to the nuclear Non-Proliferation Treaty (NPT).

In the case of Israel, this was first revealed by Mordechai Vanunu, a technician in a nuclear installation who exposed the nuclear weapons programme to a British newspaper in 1986.

North Korea (DPRK) claims to have a nuclear weapons capability. It withdrew from the NPT in 2003 and has since tested three nuclear devices, one in 2006, one in 2009 and one in February 2013. See here for CND’s statement on escalating nuclear tensions in the Korean Peninsula in April 2013.

Iran has a nuclear power programme – a number of states allege this hides a nuclear weapons programme.

Belgium, Germany, The Netherlands, Italy and Turkey, as part of their membership of the North Atlantic Treaty Organisation (NATO), have several hundred US nuclear weapons based on their soil.

Since many nuclear weapons are installed either on surface warships or in particular on submarines, they can in practice always be found almost anywhere in international waters.

Although there are 39 countries in the world, apart from the five declared nuclear weapons states, that have nuclear power or research reactors and thus the potential capability to produce nuclear weapons, nearly all of them have chosen not to possess nuclear weapons and have officially signed treaties with this intention. Many countries have also signed to be part of large areas of the world covering Southeast Asia, Central Asia, the South Pacific, Latin America and Africa that are specifically nuclear weapons free zones.

See our Briefing for details of the number of nuclear weapons possessed by each state, the delivery systems they employ, their position on first-use, and any disarmament or modernisation initiatives 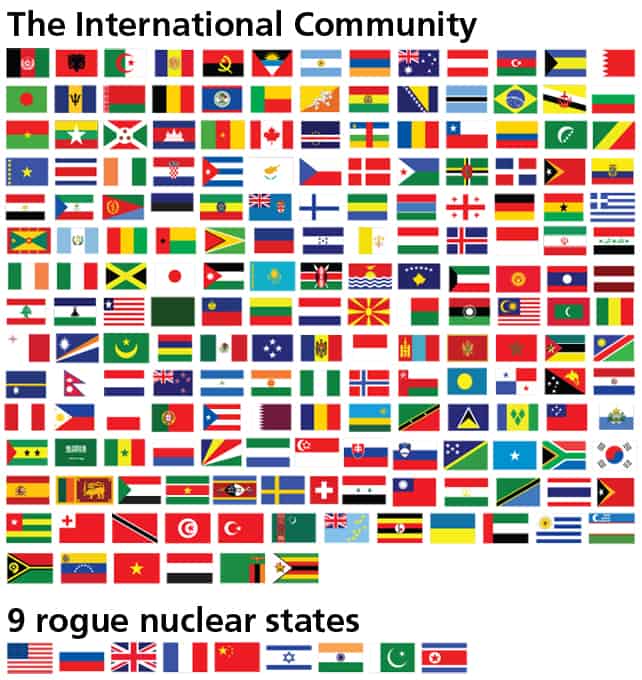