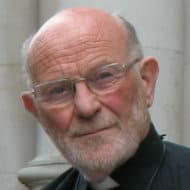 During my years in the leadership of CND I have received enormous support from Canon Paul Oestreicher, one of CND’s vice-presidents. Paul is a man of powerful faith and resolute commitment to peace and the anti-nuclear struggle, from the early Aldermaston days to today’s many challenges. It was with great pleasure that we heard the news that Paul has been awarded an OBE in the Jubilee Birthday Honours “for services to Peace, Human Rights and Reconciliation”. We congratulate Paul, and thank him for his years of dedicated service to the cause of peace. We publish here a message from Paul.

“MY LIFE FOR PEACE

Peace, non-violence and reconciliation have made my life worth living. It began in early childhood when I found myself trying hard to reconcile my often warring parents. Brought up to follow Jesus who taught his friends to love their enemies, I was a very early recruit to the peace movement. By the age of seven I was the German refugee child of enemy aliens in New Zealand, at war with Hitler’s Germany.

The day after the bomb destroyed Hiroshima, I was at high school in Dunedin. We asked our physics teacher how this was possible. He tried to explain it to us. We didn’t really understand. Then he said: ‘One thing is certain. Either we now abolish war, or war will abolish us.’

The pacifist Quakers befriended enemy aliens. So, my parents became Quakers. I grew up among them. That’s why I studied politics and then became an Anglican priest. How could I not join Canon John Collins, of St Paul’s Cathedral, leading the first marches from Trafalgar Square to Aldermaston. CND has been ‘in my blood’ ever since. To be a CND Vice-President is a high honour and, at 90, my only remaining public role. To be awarded an OBE for my peace work, which I believe my friend and role model Bruce Kent should have got, leaves me with the knowledge that this award belongs to Kate and all those who have gone on to the street with us to say no to war and of course to the scourge of nuclear weapons.”