Can your town become a Nuclear Ban Community? 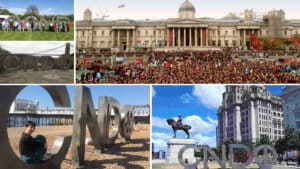 The United Nations’ Treaty on the Prohibition of Nuclear Weapons (TPNW) entered international law in January 2021. Countries across the world are supporting this historic agreement which bans nuclear weapons in participating states and is generating international momentum towards global nuclear abolition. But the UK government refused to even participate in the talks and now says it will never sign.

But we can’t let that stop us making progress. Towns and cities around the world – including Washington, Paris and Manchester – are bypassing their governments’ opposition and becoming Nuclear Ban Communities as they sign up to support the TPNW.

Your town could be a Nuclear Ban Community too

Communities across the UK are already supporting this campaign, see this map to see which local councils have adopted motions in support:

If communities get together and demonstrate their support, we can put pressure on the government to engage with the treaty. Working with your local politicians and our suggested draft motion, your town or city council could soon join others around the world that are working towards a nuclear free world.

What can you do today?

To get started, you need to contact your local councillor to explain that you would like them to propose a motion in favour of the treaty. Download the draft motion here and enclose a copy with your letter or email.

Your local CND group might already be working with the council – check to see if you have a group in your area. Or you can contact the CND national office (information@cnduk.org) for support.

You could also write a letter to your local paper about the campaign and/or post about it on social media. The more attention the campaign receives, the higher the possibility of a councillor taking notice. So make sure you talk about it with your friends and neighbours, and encourage them to get in touch as well.

And finally, for inspiration, click here to see a  list of the cities across the world supporting the nuclear ban. Hopefully your area will be next!

Parliamentarians who support the campaign

As well as the towns and cities around the world supporting the TPNW, now parliamentarians are signing up.

Click here to find out more about this support.