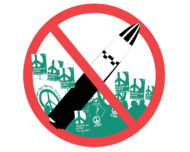 Steps towards a world without nuclear weapons

States parties to the Treaty on the Prohibition of Nuclear Weapons (TPNW) are banned from developing, testing, producing, manufacturing, acquiring, possessing, stockpiling, transferring, using or threatening to use nuclear weapons. It also makes it illegal to assist or encourage anyone to engage in these activities.

The UK government refused to participate in the negotiations and now refuses to sign – or even engage with – the treaty.

CND is lobbying the British government to sign and ratify the treaty and work towards the global elimination of nuclear weapons. The UK can sign up prior to disarming if it removes its nuclear weapons from operational status and agrees a transition plan for disarmament.

Legal obligation to disarm
From its founding meeting, CND has championed the global abolition of nuclear weapons. Trident is a relatively small part of a massive global problem that needs to be dealt with. For many years we have argued that nuclear weapons must be banned in the same way that chemical and biological weapons have been banned – or more recently cluster munitions and landmines have been outlawed. Of course, this demand for global disarmament doesn’t just come from campaigns like ours – it is made by the overwhelming majority of states globally, many of which have already taken action by forming themselves into nuclear weapons-free zones. In fact, over half the globe is covered by such agreements.

The requirement for nuclear disarmament has also been enshrined in international law since 1970, in the form of the nuclear Non-Proliferation Treaty (NPT). The NPT commits its signatories – including the UK – to take steps to disarm if they have nuclear weapons and not to acquire them if they don’t. While the non-nuclear states have kept their side of the bargain, all the nuclear powers still have their weapons and are even upgrading or modernising their arsenals. Whilst substantial bilateral or unilateral reductions have taken place since the end of the Cold War, these have largely been the result of stockpile consolidation or systems modernisation.

The Review Conferences of the NPT held every five years have failed to break the logjam and make genuine progress towards nuclear disarmament, largely because of obstruction by the nuclear weapons states. The last Review Conference in August 2022 failed to reach any agreement. Meanwhile, negotiations at the Conference on Disarmament (CD), the world’s only permanent multilateral disarmament treaty negotiating body, have been stalled since 1996.

It is in this context of frustration that the international initiative on the humanitarian impact of nuclear use – the precursor to demands for a global ban – began.

Frustration leads to new initiative
The 2010 NPT Review Conference’s final document officially expressed ‘deep concern at the catastrophic humanitarian consequences of any use of nuclear weapons’ for the first time. Following this, a group of countries began delivering joint statements on the humanitarian impact of nuclear weapons. By 2013, over a hundred governments had joined the initiative and a conference was arranged in Oslo.

Instrumental in this initiative was the International Campaign to Abolish Nuclear Weapons (ICAN), of which CND is a partner organisation. As ICAN argues, the humanitarian approach is an acknowledgement by the international community that the insistence by the nuclear-armed states on a ‘step-by-step’ approach to nuclear disarmament negotiations as the only way to make progress towards a world free of nuclear weapons, has been inadequate and is no longer acceptable.

Humanitarian impact leads to pledge
The historical experience from the use and testing of nuclear weapons has demonstrated their devastating immediate and long-term effects. No political circumstances can justify their use. Studies have shown that nuclear war would result in mass starvation due to the impact on agricultural production and profound climate change.

Conferences in Oslo and Nayarit to discuss these effects and the way forward were followed by the Vienna Conference in 2014. 155 states attended, including for the first time the United States and United Kingdom. The conference concluded with the hosts delivering a historic pledge to ‘stigmatise, prohibit, and eliminate nuclear weapons in light of their unacceptable humanitarian consequences and other associated risks’ and to ‘identify and pursue effective measures to fill the legal gap for the prohibition and elimination of nuclear weapons.’ The United Nations General Assembly adopted the Pledge in 2015 in the form of Resolution 70/48. Of the 168 nations that cast a vote, 139 (83%) were in favour. The UK voted against.

Developments at the UN
This resolution led to the establishment of a special UN working group which published a final report recommending that a conference be held in 2017 to negotiate a global ban on nuclear weapons. The nuclear nations and their proxies tried to stop this outcome but failed, as over a hundred countries voted in favour of the final report.

The adopted resolution proposed two negotiating conferences over 20 days at the UN in New York to conclude a new international treaty that would prohibit nuclear weapons.

Treaty is adopted
Representatives from over 130 countries took part in the negotiations, while the UK continued to boycott the process and stood alongside the US Ambassador in denouncing the talks. 122 countries voted in favour of the final text.

The treaty is a strong and comprehensive text which has the potential to achieve a world without nuclear weapons. Article 1 is a comprehensive ban on nuclear weapons and other related activity. The list of prohibitions includes the use, stockpiling, testing, production, manufacture, stationing and installation. Article 1 also bans assisting with prohibited acts, such as the United States leasing Trident missiles to the UK to carry nuclear warheads. It will also be illegal to allow nuclear weapons to travel through territorial waters or airspace.

Articles 3 and 4 set out how the meeting of obligations are measured, including the verification of the irreversible destruction of nuclear weapons and the programmes to develop them. There are provisions to strengthen the safeguards and a prohibition on them being weakened.

While states will be encouraged to join the treaty at the first opportunity, there are provisions in Article 4 for states to join at a later stage.

States can also sign while they still have nuclear weapons, provided they are removed from operational status and have a transition plan in place for eventual disarmament.

Entry into force
50 states needed to sign and ratify the TPNW before it could enter into force. It was Honduras’ ratification which ensured the treaty entered international law – on 22nd January 2021.

Nobel Peace Prize
The treaty is a breakthrough in international disarmament efforts and will be of enormous support in achieving the goal that most of the world shares: that there is no place for these weapons of mass destruction.

The importance of the treaty was highlighted when the 2017 Nobel Peace Prize was awarded to ICAN for its tireless work in campaigning for this momentous achievement. The award of this prestigious prize is an essential recognition of the global majority against nuclear weapons – and the movement that has done so much to advance it.

Progress of treaty
Under the terms of the treaty, state parties were due to meet within a year of entry into force to discuss progress. Due to delays caused by the Covid-19, this first meeting (1MSP) was slightly delayed, but took place in June 2022 at the UN in Vienna.

At the conference, signatory states adopted the Vienna Action Plan, in which each country agreed to steps including:
• To conduct diplomatic outreach visits with other countries who haven’t yet signed to get them to join.
• To appoint a government representative and adopt national laws to implement victim assistance for people and places harmed by nuclear weapons.
• To establish a Scientific Advisory Group for the treaty.
• To meet again in 2023, with the conference to be co-chaired by Mexico and New Zealand.
• To establish working groups to meet in between MSPs to progress on certain issues.

The treaty will also now include a deadline of 10 years for the elimination of nuclear weapons when nuclear-armed states join the TPNW.

But what about the nuclear states?
Although law, morality and mass popular will are already in favour of getting rid of nuclear weapons, the nuclear states ignore all these factors. This leaves the big question of what difference will the TPNW make?

The treaty is a significant pointer towards changing international attitudes to nuclear weapons. Previous treaties prohibiting chemical and biological weapons helped to stigmatise them in the minds of the public. We are now seeing this happen with nuclear weapons.

But while CND welcomes the adoption of the treaty, it is important to be realistic. Given that the UK is progressing with plans to replace Trident, it is unlikely that the Prime Minister will be signing the treaty any time soon. However, we must do all we can to put this treaty right at the top of the political agenda.

CND will continue to work with all our partners in Parliament and across civil society to oppose the replacement of Trident, as well as raising awareness of the treaty and the potential it has to bring about positive change.

Large cities including Washington D.C., Paris, Berlin and Manchester have all adopted motions declaring their support. Other towns and cities in the UK to join the campaign include Edinburgh, Norwich and Leeds. This is an important statement in support of this new treaty, showing that citizens across the world want their governments to sign.

Conclusion
The UK government continues to state its commitment to multilateral nuclear disarmament and should sign the treaty which aims to achieve that goal. In this spirit, Trident should be scrapped and plans for its replacement cancelled in what would be a significant step towards a nuclear weapons-free world.