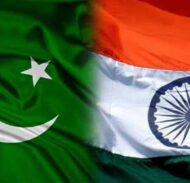 India and Pakistan possess around 300 nuclear warheads between them, but yet are not recognised as official nuclear weapons states by the international community. This is because they developed their respective nuclear weapons programmes after the entry into force of the nuclear Non-Proliferation Treaty (NPT) in 1970. This disarmament treaty does not allow any new states to sign while they are nuclear-armed.

India and Pakistan share a turbulent history. When the British-controlled India became independent in 1947, two new states were founded – present day India and Pakistan. In the process, over 10 million people were displaced and up to a million killed. Since independence, the two countries have gone to war four times.

India began nuclear research pre-independence in 1944, and subsequently strong and divergent views were held as to whether India should develop nuclear weapons or not. By 1965, India – together with Sweden – was leading attempts to halt proliferation and limit the nuclear weapons capability of the nuclear weapons states. Yet conflict with China – which was developing nuclear weapons, with its first test in 1964 – led to a decision to develop a nuclear weapons capacity. In 1974, a nuclear device was tested – code-named Smiling Buddha – a move condemned by the international community. The US imposed sanctions although India did not move at this stage to the production of nuclear weapons. However, in 1998, India conducted further nuclear tests and announced its nuclear doctrine of ‘credible minimum deterrence’, based on ‘retaliation only’.

Pakistan started to develop nuclear weapons in 1972 in response to India’s developing nuclear weapons programme and after its defeat by India and the subsequent gaining of independence of Bangladesh (formerly East Pakistan) in the Indo-Pakistani War of 1971. The programme was stepped up after India’s Smiling Buddha test in 1974. By the 1980s, it is believed Islamabad had developed the technology sufficiently to produce a nuclear weapon. After India’s 1998 nuclear tests, Pakistan itself carried out a nuclear test.

India formally declared itself a nuclear weapon state in 1998, after two rounds of nuclear tests. A month later, Pakistan retaliated with similar tests and declaration, leading to fears of an escalating arms race. The country has sought to portray itself as a ‘responsible’ nuclear power, even though it is not a signatory to the NPT or the Comprehensive Test Ban Treaty (CTBT).

For its part, Pakistan has said that it will only sign the NPT and CTBT once India does so. Pakistan is currently blocking negotiations on the Fissile Material Cut-Off Treaty (FMCT), which is aimed at stopping the further production of nuclear weapon fissile material.

It is believed that India has between 130-140 nuclear warheads, which can be used with land-based or sea-based missiles as well as on aircraft. Pakistan in turn has between 150-160 warheads for delivery by sea-based, aircraft and land-based missiles, though neither country has officially confirmed these figures.

India does not maintain a nuclear force on high alert and maintains a no first use policy, although the government has stated it could use them in retaliation to a chemical or biological attack, or to protect Indian forces operating in Pakistan. Islamabad, however, has refused to adopt a no first use policy and maintains it would be prepared to attack India first. It is believed though that Pakistan stores its warheads and delivery vehicles separately in times of peace.

While Pakistan has worked with China on developing its nuclear capacity, India has signed a cooperation agreement with the United States which allows the former to engage in international nuclear trade. India has also concluded a deal on nuclear trade with Canada and Australia.

Pakistan has been developing nuclear-capable short-range missiles that appear to be intended for a tactical nuclear attack. This is likely in part to be because of Pakistan’s need to counter India’s growing missile defence system. Concerns have been raised that these nuclear weapons could fall into the hands of terrorists operating in the region, as Pakistan is affected by violent Islamist militancy.

Both India and Pakistan are believed to be modernising and expanding their nuclear weapons arsenals, actions which threaten regional and international peace. Escalating tension between the countries because of their rivalry over the disputed territory of Kashmir has underlined the threat of war between the nuclear-armed states. The possibility of weapons of mass destruction being used in a possible future conflict causes deep concern.

India and Pakistan should stop making new nuclear weapons and get rid of the ones they do have. This, alongside becoming non-nuclear signatories of the NPT and CTBT, would be a huge step forward for the security of both countries and for the international community as a whole.

Get Britain to the nuclear ban conference
Talks not Bombs
Your support goes a long way!
Donate
Get the latest updates on our campaign
Manage Cookie Consent
To provide the best experiences, we use technologies like cookies to store and/or access device information. Consenting to these technologies will allow us to process data such as browsing behaviour or unique IDs on this site. Not consenting or withdrawing consent, may adversely affect certain features and functions.
Manage options Manage services Manage vendors Read more about these purposes
View preferences
{title} {title} {title}