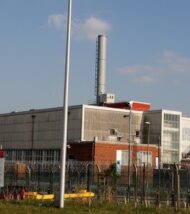 The development and maintenance of the Trident nuclear weapon system, and its planned replacement, is a huge operation. Work takes place in bases all over the United Kingdom.

The Atomic Weapons Establishment (AWE) at Aldermaston, near Reading, is where Trident’s warheads are designed, manufactured and maintained.

Aldermaston is owned by the Ministry of Defence (MoD), but as a Government Owned-Contractor-Operated (GOCO) facility, it is run by AWE plc, a consortium composed of companies Lockheed Martin, Serco and Jacobs Engineering. In addition to awarding billion pound contracts to AWE Aldermaston, the government pays almost £1 million a year to run the factory.

There have been numerous safety incidents at AWE Aldermaston over the years. Following a 2013 court case, AWE plc was fined for significant failings relating to its use and control of explosive materials.

The Atomic Weapons Establishment at Burghfield is seven miles from Aldermaston and is responsible for assembling the UK’s nuclear warheads, their in-service maintenance and will eventually be where they are decommissioned.

Nuclear components are transported from Aldermaston to Burghfield, where they are assembled and then transported by road to Coulport for deployment on Trident submarines.

The Vanguard-class submarines which are armed with the UK’s nuclear weapons are based at the Faslane naval base at HMNB Clyde, near Glasgow.

The nuclear warheads are regularly transported between AWE Burghfield and Coulport in order to be refurbished at the former.

The government has already assessed what modifications will be required at both Faslane and Coulport for the new, larger submarines expected with the Trident replacement

HMNB Devonport, in Plymouth, is where the UK’s submarines undergo refuelling of their nuclear reactors and refurbishment of their systems. All of the British submarines are nuclear-powered, but one dock was specifically built to maintain the Vanguard-class submarines, which carry the UK’s nuclear weapon system.

Devonport will be one of two sites in the UK – along with Rosyth in Fife – where decommissioned nuclear-powered submarines will be dismantled. Radioactive waste will be removed from the boats at the site, and transferred to Capenhurst Nuclear Services in Cheshire.

The Trident submarines were built at the ship yard in Barrow-in-Furness, now owned by BAE systems.  Work began on the submarines for the new system here in 2016.

Nuclear reactors that power the Trident submarines are built by Rolls Royce in Derby. The nuclear fuel that powers Trident nuclear reactors and the fuel rods that are put into the modules of the reactors are also manufactured there.

The government has awarded Rolls Royce over a billion pounds in contracts to produce new reactor cores for the next generation of nuclear-armed submarines.

Sellafield is a nuclear plant on the west coast of Cumbria, which produces and stores the plutonium used for the Trident nuclear weapon system. Each warhead probably contains between three and six kilograms of plutonium. It is thought that Sellafield stores around 112 tonnes of this toxic substance, at an estimated cost of £80 million a year.

The site is owned by the Nuclear Decommissioning Authority, who is looking into what can be done with the stockpile of plutonium.