Join the CND anti-nuclear bloc at the Trades Union Congress march and rally to demand better – no nuclear weapons and a better quality of life for all!

Working people have had enough. Everything’s going up but our wages. The government says it has no money but is in the process of spending at least £205 billion on new nuclear weapons. The UK government is increasing the number of warheads in its Trident nuclear weapons arsenal for the first time since the Cold War. At the same time, it says it doesn’t have enough money to properly pay our public sector workers, such as the nurses who have looked after us throughout the pandemic.

CND will be joining the trade union movement and wider civil society in London for this demonstration – to tell this government: we DEMAND better! Will you join us? 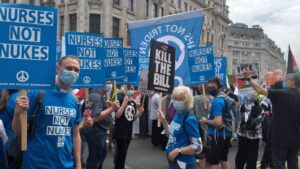