The Campaign for Nuclear Disarmament is saddened by news of the death of Alice Mahon, former Labour MP for Halifax, who died on Christmas morning aged 85. Peace figured centrally in her political and personal values. Alice was a CND supporter throughout her life. She joined marches, vigils, street protests, and spoke at meetings up and down the land – no role was too humble, no town too distant.

A CND Vice-President at the time of her death, Alice was a former National Council member and a Labour CND Vice President. In retirement, she continued to take part in regional events and remained in touch with her local group, Calder Valley CND.

I first met Alice shortly after her election to parliament in 1987, when she spoke at a Labour CND conference in Manchester Town Hall. We were friends from then on, campaigning together for peace over four decades. Alice made parliament her platform against nuclear weapons. Within months of taking her seat, she was critical on issues as diverse as ballistic missile defence systems, trains carrying nuclear waste, and the cost of Trident missiles.

When the war on Iraq began in February 1991, Alice was a member of the Committee to Stop War in the Gulf, called together by CND. Anticipating the war to come, the committee had been established in the late summer of 1990.

As with Iraq, so with former Yugoslavia. Alice and I set up the Committee for Peace in the Balkans at the outbreak of civil war in the early 1990s. Despite media vilification, she was one of a very few MPs to oppose western intervention, recognising its likely outcome and believing it had little to do with protecting the Yugoslav population. In addition to the devastation Nato’s aerial bombardments of Bosnia then Serbia and Kosovo caused the country and its peoples, Alice believed the military operations assisted the explicit US aim of moving the nuclear-armed North Atlantic Alliance closer to Russia’s borders.

In 2001, as the news of 9/11 broke, we were heading to Brighton where that year’s Trades Union Congress was meeting, to launch a campaign among trade unionists in support of the Anti-Ballistic Missiles Treaty which the US was threatening to withdraw from (and subsequently did). Like CND, Alice recognised that the 1972 ABM Treaty between the US and USSR was the cornerstone of arms control, vital in keeping nuclear escalation and war at bay. TUC Congress was curtailed, however, and the campaign launch didn’t take place.

In the changed environment that followed 9/11 Alice campaigned against Nato intervention in Afghanistan, and was horrified at Tony Blair’s support for the 2003 Iraq invasion. As well as taking an active part in the newly launched anti-war movement, Alice set up Iraq Liaison in 2002 to encourage opposition to another war on Iraq amongst all the political parties in parliament, and worked hard with Tam Dalyell and others to raise it on the floor of the Commons.

In the run up to the invasion, Alice tabled an Early Day Motion opposing intervention which brought together the biggest show of parliamentary opposition to the Iraq war and attracted wide publicity. EDM 927 was signed by 162 MPs – from the Liberal Democrats, Plaid Cymru and Scottish National Party as well as many of her Labour colleagues, including four ex-ministers.

In one of her regular news releases at the time, Alice said of Blair: ‘The Prime Minister has failed miserably to make a case for military action… Briefings by ministers are pathetic – lightweight statements of belief with no facts whatsoever about the actual situation. I shall be calling for [a debate] when the House sits this afternoon.’

Less well-known perhaps, Alice was an elected and well-respected UK member of the Nato Parliamentary Assembly, even chairing one of its sub-committees for a time. Her involvement didn’t for one moment stop her from speaking out against Nato – something which would likely see her removed from today’s Parliamentary Labour Party!

There aren’t too many like Alice left in the House of Commons nowadays – an MP who remained unbendingly committed to peace, socialism, and internationalism. Alice loved being an MP. But she was much more than that – quite simply, someone who worked hard at living a life in line with her principles of peace and nuclear disarmament. She will be very missed by the great majority of us who share those values. 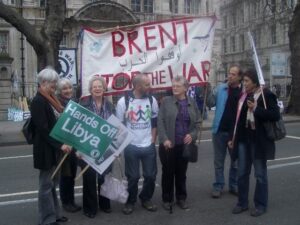