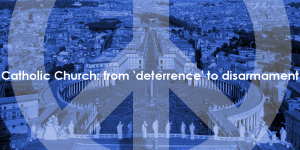 A major conference on nuclear disarmament took place at the Vatican on the 10th and 11th of November 2017.

Catholic commentators have suggested the conference signalled a dramatic shift in the Church’s approach to nuclear weapons under the stewardship of Pope Francis.

Stephen Colecchi, director of the U.S. bishops’ conference’s Office of International Justice and Peace, said in the National Catholic Reporter that the Church’s previous stance on nuclear ‘deterrence’, and the balance of nuclear weapons between the major powers, was that it was seen as a step to disarmament, but he believes things have changed.

“They’re planning modernization of nuclear weapons. You don’t modernize a weapons system that you intend to disarm from. So I think deterrence is on very thin moral grounds.”

The conference Prospects for a World Free from Nuclear Weapons and for Integral Disarmament came after the Vatican became the first state to sign and ratify the UN’s groundbreaking nuclear weapons ban treaty, launched in 2017.
It took place, also, in the the midst of an international crisis: the war of words between the leaders of the US and North Korea have raised concerns about the potential for actual nuclear warfare.

The Pope said ahead of the two-day event: “The international community is called upon to adopt forward-looking strategies to promote the goal of peace and stability and to avoid short-sighted approaches to the problems surrounding national and international security.”

The conference hosted representatives from ICAN, the winners of the 2017 Nobel Peace Prize. ICAN, the international network of which CND is a member, successfully campaigned in support of the 122 states initiating the new ban treaty.

“We welcome the Pope’s address on nuclear weapons at this timely conference. He condemned the ‘use as well as the very possession’ of all nuclear weapons and he’s done more, perhaps, than any other world leader to build support for the UN Treaty on the Prohibition of Nuclear Weapons.

“There are an estimated 1.2 billion Catholics around the world, many of them resident in the nuclear states. If the Pope manages to mobilise his flock against nuclear weapons, his enthusiastic leadership could prove to be a decisive step towards a nuclear free world.”