As world leaders head home from Glasgow after a disappointing ending to the COP 26 climate change conference, we must continue to highlight the links between militarism and climate change. Nuclear disarmament will help save the planet.

Find out more about CND’s Climate not Trident campaign.

As protests and actions took place across the globe during the conference , it was amazing to see so many actions taking place up and down the UK. Over a hundred thousand people demonstrated in Glasgow and many people joined the march in London, demanding peaceful action to save our planet.

Many CND groups were active and our banner featured on the London demonstration, calling for urgent action to deal with the climate threat. 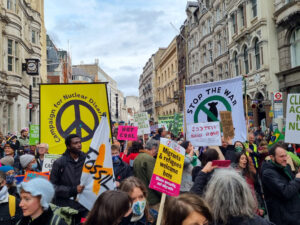 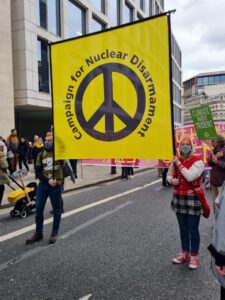 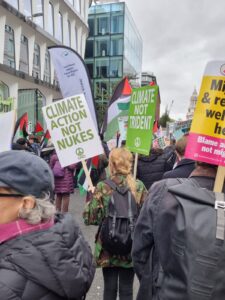 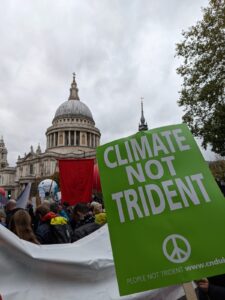 “Prime Minister Boris Johnson has plagiarised the Bulletin of Atomic Scientists Doomsday clock’s count down to nuclear armageddon in order to scare world leaders at COP26 into the dangers of an environmental armageddon. He should equally scare the world that, unless unless there are meaningful and urgent steps towards nuclear disarmament, we may achieve the same armageddon through a world destroying nuclear winter. To that end, he should resile the recent decision to increase the UK cap on nuclear weapons by 40% and declare a policy of ‘no first use’. These steps would make the world that much safer and be an exemplar for the other nuclear weapon states.”

Protest at COP26
Make our voices heard
Your support goes a long way!
Donate
Get the latest updates on our campaign