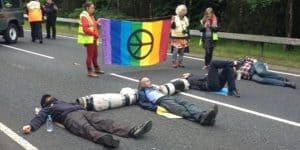 This morning, for the second time in three days, Trident Ploughshares campaigners blocked roads into the nuclear warhead store at Coulport on Loch Long as part of a week of peaceful disruption of the UK Trident bases in Scotland.

A group of four protesters blocked the main route to the base by lying in the roadway joined to each other through “lock-on” tubes while a different group, in carnival costume, occupied an alternative access route. Access to the base via these roads was blocked for over two hours.

The “lock-on” group was eventually removed by police and the four arrested on a charge of breach of the peace. Those arrested were Esa Noresvuo (26) and Kaj Raninen, both from Helsinki, Peter Anderson (60), from Wales, Jamie Watson (35), from Glasgow.Meanwhile Brian Quail (79) a retired teacher from Glasgow, and Angie Zelter (66), a peace and environmental campaigner from Knighton in Wales are in prison until their trial on 3rd August, Brian in HMP Low Moss and Angie in HMP Cornton Vale. They were remanded in custody yesterday after refusing special bail conditions which prohibited them from protesting at Faslane or Coulport.