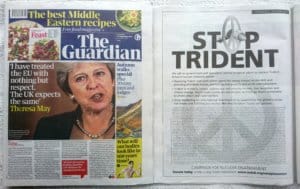 CND works to end nuclear weapons – an outdated, expensive technology that has the potential to wipe out life on earth. We’re calling on the UK government and opposition parties to cancel plans to replace Trident, Britain’s nuclear weapons system.

Please support us by making a donation today.

• Replacing Trident will cost at least £205 billion. CND speaks directly to MPs to argue that this money should instead be spent on the NHS and providing affordable homes, combatting child poverty and youth unemployment.

• Trident is militarily useless. CND’s reports show that nuclear weapons don’t address our real security threats, like terrorism and climate change.  They are also an out of date technology, vulnerable to drone attack and cyberwarfare.

• The world is working towards the end of nuclear weapons, through the UN’s  global nuclear ban treaty. Right now, we’re campaigning to ensure the treaty is in effect as soon as possible, outlawing nuclear weapons. But we need your support in doing this, please donate today.

Other ways to give