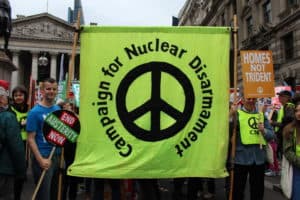 CND was formerly convened in 1958 following the publication in The New Statesman of an article by Bradfordian J. B. Priestley. Since then, Bradford has played a major part in the progression and development of CND, becoming one of the UK’s first Nuclear Free Zones in 1981.

Our panel, featuring CND General Secretary Kate Hudson, Director of the Bradford Peace Museum David Kennedy, and campaigner and academic Michael Randle, will examine the local significance of CND, why Bradford has played such a pivotal role in the movement, and where the future of nuclear lies.