USAF Croughton is about to undergo one of the biggest redevelopments since it was constructed by the USAF almost 70 years ago. The new ‘Joint Intelligence Analysis Complex’ will put the site at the heart of a web of military and intelligence networks stretching from the USA to Europe, North Africa and the Middle East.

As part of the new JIAC development, the site’s increased involvement in the mass surveillance of society, the use of armed drones, and the use special forces for alleged ‘counter-terror’ operations, in North Africa and the Middle East, will place it at the heart of NATO’s military-intelligence machine.

The information fed from drones, satellites, and military operations will be collated at the new JIAC, and then networked to military and intelligence agencies in the US, or engaged in operations in the region. 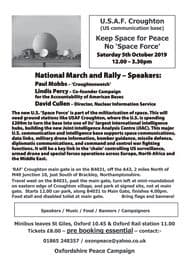 These operations will include drone strikes and targeted killings, as well as intrusive surveillance against populations in ‘peaceful’ states, and/or the processing of information and the co-ordination of actions in support of these.

What the USA and NATO through operations at USAF Croughton is, quite simply, ‘state terror’. Outside of identified war zones, what the US and its NATO allies are doing in the regions affected by the operation of Croughton is an abuse of people’s human rights, and arguably a violation of International Law.

Please come to this demonstration! It’s time to confront the “terrorists” in our own back yard!