People gathered far and wide to remember the two days when nuclear weapons killed hundreds of thousands of people. The 6th and 9th of August were the 73rd anniversaries of the atomic bombs that were dropped by the United States on the Japanese cities of Hiroshima and Nagasaki.

We gather to remember to make sure it never happens again.

Supporters travelled all the way from New Zealand to commemorate Nagasaki day in Ayrshire.

Did you know some people travel all the way from New Zealand to commemorate #NagasakiDay with us? pic.twitter.com/GY37gLzlyQ

Bedford CND displayed a banner on Bedford’s Riverside North Bridge drawing attention to the UN Nuclear Weapon Ban Treaty, which the UK government has so far refused to sign.

Commemorating Hiroshima & Nagasaki this morning at #Bedford‘s Riverside North, on the 73rd anniversary of the bombings. And also celebrating the ongoing progress of the UN nuclear weapon ban treaty #nomorehiroshimas pic.twitter.com/KGXKYNzJet

Local supporters of CND held events at three iconic sites in Cumbria on the 6 August calling on the Government to sign the UN Treaty on the Prohibition of Nuclear Weapons and to scrap the Trident nuclear weapons system. Their events also commemorated the 73rd anniversary of the dropping of the first atomic bomb on the Japanese city of Hiroshima in 1945 which killed 140,000 people and the widespread suffering caused by nuclear weapons and nuclear power in subsequent years. 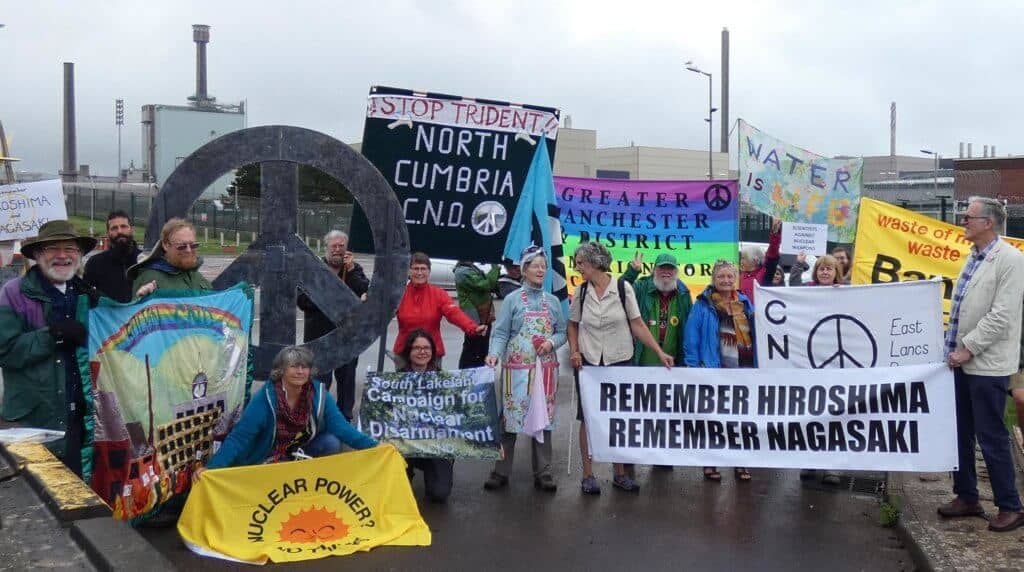 The Lord Mayor of Exeter joined his local CND group to participate in events for Hiroshima and Nagasaki remembrance days.

Lifelong campaigner Bruce Kent  and the deputy Mayor of Camden joined London CND in Tavistock Square for a day of prayer and remembrance.

We’re at the London #Hiroshima commemoration with the Deputy Mayor of Camden and Bruce Kent, remembering the victims of nuclear weapons https://t.co/ts1lINvBLw pic.twitter.com/WpUYfFogc7

Remembering the victims of #Hiroshima and #Nagasaki #neveragain #stoptrident pic.twitter.com/jgb6L5Y7RA

Simple yet powerful, a reflective way to think about why the suffering of the past should not be repeated.

A beautiful memorial gathering in Scotland, peace activists from Renfrewshire and Inverclyde joined in Paisley.

Some of @SSPRenfrewshir1 and @SSP_Inverclyde members with #CND activists at this week’s #Hiroshima memorial in Paisley. pic.twitter.com/Tng6YQGEGS

A hundred people from Leeds and Yorkshire  attended the commemoration event.