In the early hours of 26th April 1986, one of the four reactors at the Chernobyl nuclear power station ran out of control while engineers were running safety tests. A power surge of 100 times normal output led to a violent explosion and fire. The 1,000 tonne concrete and steel top of the reactor building was blown off and huge chunks of blazing, radioactive material were blasted into the air.

With the reactor burning furiously and highly radioactive debris being scattered over a wide area, a major emergency operation began. As helicopters tried to smother the fire by dumping tons of sand on it, firemen and site workers fought the blaze. However the fire at the core of the reactor continued to burn for more than a week before it was finally put out, spewing ever more radioactive material into the environment.

Meanwhile, 830,000 workers, many of them soldiers, were drafted in to clear up the site. Called ‘liquidators’, many were exposed to terrifyingly high levels of radioactivity. With very little in the way of protective clothing, they were only allowed into the reactor building for 90 seconds at a time. The few remote-controlled robots available were put out of action by the heat and radioactivity.

The clean-up work continued for two years as the entire reactor building was sealed in a huge concrete tomb-like structure known as the ‘sarcophagus’.

How many people died or were affected by the disaster?

There are conflicting estimates of the number of deaths caused by the Chernobyl disaster and we may never know the full extent of the impact on human health. Although exposure to very high levels of radioactivity rapidly leads to death, lower doses may not have any obvious effects for years. So, since a percentage of any population will develop cancer in later life for all sorts of reasons, many of which are not yet properly understood, it is impossible to say with certainty that a particular cancer has been caused by a particular cause. The connection is a statistical one. Additionally, since the liquidators, their work done, are now scattered all over Russia and the rest of the former Soviet Union and no proper medical records are being kept, the final death toll will never be known.

Nonetheless, it is clear that, apart from the 31 who died immediately following the disaster, many, many thousands of people have either died or become ill from radiation poisoning caused by the accident.

The lowest figure estimated is from The Chernobyl Forum (including WHO, IAEA and United Nations representatives) which reported in 2005 a figure of around 4,000 deaths occurring in those affected by high levels of radiation contamination: evacuees and liquidators in the subsequent clean-up of the site.

However, many argue that the 1959 agreement made by the International Atomic Energy Agency (IAEA) and World Health Organisation (WHO) which gives either organisation the right to approve the other’s research results in the down-playing of the disaster’s effects due to one of the IAEA’s main objectives being to promote nuclear power.

Further studies have included deaths in the populations affected by fallout including thousands of children and infants. In particular, The Other Report on Chernobyl (Torch Report) estimated in 2006 that the numbers are more likely to be 30-60,000. A Greenpeace report in 2006 put this figure nearer to 200,000.

A book published in 2009 by the New York Academy of Science analysing thousands of published papers put the figure higher still, concluding that the number of people across the globe whose deaths are attributable to radiation exposure from this disaster may be closer to one million.

As scientists and medical experts learn more about the long-term effects of radiation exposure, estimates of the numbers who will die as a result of the disaster increase. 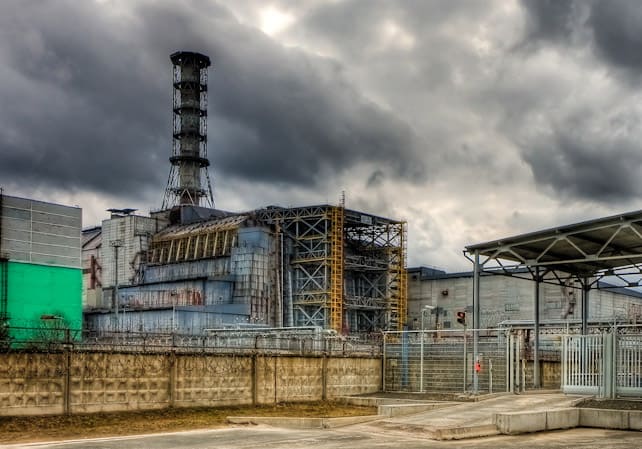 Direct casualties of the explosion were rushed off to hospitals as far away as Moscow. Then it became clear that because of the intense radioactive fallout, all the surrounding population would have to be evacuated. Police surrounded Pripyat, the nearest town (2.5km away), set up road blocks and prepared to deal with any panic.

On Sunday 27th April, at 1.50pm, local radio announced the start of a mass evacuation. At 2pm, 1,100 buses began to pick up the 40,000 residents. Almost all belongings had to be left behind. Sunday lunches were left on tables, pets and livestock abandoned.

By 4.20pm the town was empty. On 3 May, the total evacuation zone had to be extended to a 30km radius. In early June another 35,000 people had to be moved as more highly radioactive spots further away were discovered.

In all, around 115,000 men, women and children were evacuated. This area, officially called the exclusion zone and known locally as the Dead Zone, is still empty – except for a few elderly people who have crept back and who refuse to leave their land. Pripyat is a ghost town.

As much of the radioactive material had been blasted high into the atmosphere, it was picked up and carried by the wind in many directions and often over very long distances.

By 29th April, radiation traces were being picked up as far away as Norway, Austria and the Black Sea. Three days later the radioactive cloud had reached Britain.

This wind-blown radioactive dust may drift more or less harmlessly overhead. However if it rains, the dust will be washed out and fall as radioactive rain. As the cloud passed across northern Europe, it rained over Lapland (northern Sweden, Norway and Finland) and then heavily over North Wales and Cumbria, Scotland and Northern Ireland.

In Britain, the areas worst affected were the hill farms of North Wales, Cumbria and South Western Scotland, where the sheep were now eating contaminated grass. The lambs were then affected through their mothers’ milk. At first the British government said there was nothing to worry about: ‘The effects of the cloud have been assessed and none presents a risk to the UK.’(Kenneth Baker, Secretary of State for the Environment, 8 May).

On 13th May the Secretary of State repeated that no special precautions were needed. Then suddenly there were warnings not to drink rain water in the affected areas. Only in late June was it officially admitted that many sheep had absorbed dangerous amounts of radiation. At first in Cumbria and North Wales, then in Scotland, farmers over wide areas were banned from moving their sheep and lambs off the land, taking them to market or selling them for slaughter.

Over a million sheep were affected by the Ministry of Agriculture prohibitions. The livelihoods of many farmers were threatened and large sums of money had to be paid out in compensation. The final restrictions on sheep movement in England and Wales were only lifted in 2012, twenty six years after the disaster.

What is happening now?

An arch to cover the still-active reactor core structure is currently under construction and is expected to be finished by 2015. It’s considered to be one of the biggest engineering projects in history, costing at least £1.2 billion.

It’s hoped that the arch will be completed before a major collapse. Otherwise a large amount of radiation would be scattered over a wide area.

For more information on the continuing health consequences in the region relating to children see the Chernobyl Children’s Website.

For more information on the disaster see the Chernobyl 25 website.