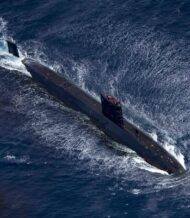 CND has calculated that replacing Trident, Britain’s nuclear weapons system, will end up costing at least £205 billion, and that’s before taking into account that Ministry of Defence projects typically go well over budget.

The costs of replacing Trident

Parliament voted in July 2016 to go ahead with building new submarines, the delivery vehicles for the nuclear missiles. In its National Security Strategy and Strategic Defence and Security Review, published in November 2015, the government announced a huge increase in the estimated cost of these submarines to £31 billion. Additionally, a contingency fund of £10 billion was allocated to the project.

The UK leases the missiles for the nuclear weapons system from the United States and will participate in that country’s missile life extension programme so that they can be used until the early 2040s. As set out in the government’s 2006 White Paper on ‘The Future of the United Kingdom’s Nuclear Deterrent’, this will cost £250 million, or £350 million in today’s prices.

The 2006 White Paper also stated that the current warhead will last into the 2020s and provided for up to £3 billion for the possible future refurbishment or replacement of the warhead. This is £4 billion in today’s prices. Another £3 billion (or £4 billion in today’s prices) is allocated for infrastructure at Faslane and Coulport bases over the lives of the submarines.

The biggest expense however is the day to day running costs, which the government confirms is around 6% of the total defence budget. Conservative MP and Chair of the Foreign Affairs Committee Crispin Blunt worked with Reuters to estimate that over the lifetime of the system, this would add up to £142 billion.

An additional cost to the public purse is the conventional military forces who are assigned to support the nuclear weapons system. In 2007, the government said it believed around £30 million was spent on this function annually. Over the lifetime of Trident’s replacement, this will add up to just over £1 billion in total.

It is difficult to know how much decommissioning Trident’s replacement will cost, but using the government’s estimate for decommissioning its previous nuclear weapons system, Polaris, it seems this will be at least £13 billion in today’s prices.

£20 billion is being spent on the Atomic Weapons Establishment (AWE), where the warheads are manufactured and maintained, over the period 2000-2025. This money will be spent on infrastructure building work, servicing costs, upgrading the warhead and studies for development of a replacement. CND hasn’t separately itemised this amount for the time being as it is not yet clear whether this will be separate to other amounts announced by the government.