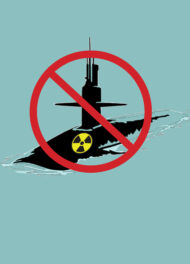 AUKUS: Why we say no

What is AUKUS?
AUKUS is a military partnership between the UK, the US and Australia, that was signed between these three countries in September 2021. Billed as ‘a landmark defence and security partnership’, its key military focus centres on ‘the development of joint capabilities and technology sharing’, deeper integration of security and defence-related science, technology, industrial bases and supply chains.

It’s being justified on the basis of upholding the ‘rules-based order’, yet the treaty undermines the rules of international law.

Driving nuclear proliferation and breaking international law
Spreading nuclear technology is at the heart of the deal: the US and UK are collaborating with Australia to provide them with nuclear-powered submarines. Currently only six countries, all nuclear weapon states, have nuclear-powered subs (see Figure 1). Australia will become the seventh and the first non-nuclear weapons state to acquire nuclear reactors to power submarines. This risks nuclear proliferation and is a breach of the nuclear Non-Proliferation Treaty (NPT).

Boris Johnson argues that the AUKUS agreement does not contravene the NPT because the shared technology is for nuclear power, not nuclear weapons. The NPT does not stop the exchange of civil nuclear technology but it stipulates it must be ‘for peaceful purposes’. However, the exchange is not peaceful. The pact enables the transference of weapons-grade enriched uranium to power war-fighting submarines undertaking provocative actions in potential conflict in the Indo-Pacific region.

This is the second time in 2021 that the British government has breached the NPT. In March, its Integrated Review included a 40% increase in the nuclear arsenal – contravening its obligations to take steps to disarm.

The pact will also see the three countries sharing cyber capabilities, artificial intelligence and other undersea technologies. Australia will also secure long-range Tomahawk cruise missiles, and allow the US to station more troops in the north of the country.

AUKUS – a boost for the British nuclear industry?
The deal may also have commercial implications, with a possible boost for the British nuclear industry. Following a £210m subsidy from the British government, Rolls-Royce (whose factory is based in Derby) is urging Australia to buy small modular nuclear reactors for civil energy production as well as reactors to power the submarines – in spite of an Australian moratorium on nuclear energy. The government may also try to secure decommissioning contracts for the spent fuel, which would exacerbate the build-up of toxic radioactive waste at Sellafield: the Cumbrian site contains hundreds of tonnes of highly radioactive material build up over 60 years.

AUKUS – continuing military escalation against China
The AUKUS pact is a dangerous escalation in the West’s ongoing confrontation with China.

A decade ago, the US announced its ‘Asian pivot’ – refocussing US military, strategic and naval resources towards the Asia Pacific. Around 100,000 US troops are based across Japan, Australia, South Korea, Guam and Hawaii , and over 400 US bases encircle China (see Figure 2). This has intensified under the Biden administration. Earlier this year, he hosted the first-ever summit of the ‘Quad’ – a military alliance with Japan, Australia and India – to ‘meet challenges to the rules-based maritime order in the East and South China Seas’.

The 2021 Integrated Review of Security, Defence, Development and Foreign Policy , outlines the British government’s strategic ‘tilt’ to focus on the Indo-Pacific – building a network of allies with India, Australia and others against China. It broke with the 2015 Strategic Review which promoted closer relationships across the Asia Pacific.

In May, the HMS Queen Elizabeth aircraft carrier left Portsmouth for the South China Sea, accompanied by a major naval flotilla – the largest British naval and air taskforce since the Falklands war; it participated in provocative naval exercises with India, Japan, South Korea and Singapore as well as causing an international incident en route.

Indo-Pacific and nuclear colonialism
There is also a further colonial context to the British and US presence in the Indo-Pacific. John Pilger’s 2016 documentary ‘The coming war with China’ graphically illustrates the devastating impact of nuclear testing on the inhabitants and their islands, such as the Kiribati (Christmas), Malden and Marshall Islands, then under British and US colonial control in the 1950s. As well as the environmental devastation, islanders still suffer from the long-term impacts of the exposure to radiation, experiencing increased rates of cancer . In the mid-1980s states in the South Pacific declared the region a nuclear weapon-free zone, known as the Rarotonga Treaty . The AUKUS pact may well breach this Treaty.

AUKUS makes the world more dangerous
The AUKUS pact brings nuclear technology into an increasingly militarised part of the world, where accidents or further provocations could flare up into full-scale war.

Indonesia and Malaysia have raised concerns the deal could lead to a regional arms race and Pacific nations, already ravaged by nuclear testing, say the whole region has been put at risk.

War drives climate change
Military escalation against China is also diverting much needed resources away from cutting carbon emissions and halting the climate catastrophe. Scientists for Global Responsibility estimate that from 2021-2025, the British government will spend over seven times as much (£190.5bn) on the military as on reducing national carbon emissions (£25.6bn) (see Figure 3).

And the £205bn that the UK government is spending on replacing Trident could pay to install solar panels in every home or build enough wind turbines to power all households in the UK.

In fact, as the climate crisis gains pace, there will be increasing pressures on access to resources such as land, food and clean water, making war and nuclear conflict more likely.

Global cooperation and nuclear disarmament
Instead of this drive to a new cold war, which threatens to become a hot war with the real possibility of the use of nuclear weapons, we need global cooperation to tackle the very obvious threats of climate change and pandemics.

Governments across the world have shown it is possible to come together to develop nuclear-free zones: they exist in the South Pacific, Latin America and the Caribbean, Southeast Asia, Central Asia and Africa. This cooperation is going a step further with the UN Treaty on the Prohibition of Nuclear Weapons. It is the direction demanded by the global majority, not a new nuclear arms race.

Building opposition to AUKUS internationally and locally
CND is working in unity with partners in the peace movements in the US and Australia against AUKUS, and we want to build on that here. Our members, supporters and local groups have a central role to play in raising public awareness of AUKUS across the country; you can involve other peace and environmental organisations, trade unions and political parties, students and young people, to help mobilise opposition. Visit CND website to lobby your MP to support Early Day Motion 493 against AUKUS , and make use of the model motions for trade union and political party use.

End the conflict in Ukraine
Write to the Prime Minister
Your support goes a long way!
Donate
Get the latest updates on our campaign