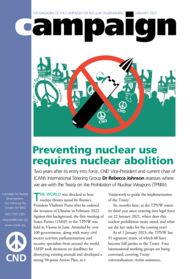 A new treaty banning nuclear weapons entered into force two years ago this month. This month’s magazine includes an article assessing where we are with the Treaty on the Prohibition of Nuclear Weapons and what developments we can expect in 2023.

This year, we are also likely to see more developments in the militarisation of space. Britain’s first ever space launch may have failed in its mission this week, but there is no doubt that the government intends to continue its dangerous plans. Find out more in the magazine.