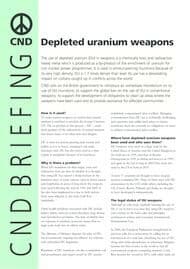 The use of depleted uranium (DU) in weapons is a chemically toxic and radioactive heavy metal which is produced as a by-product of the enrichment of uranium for civil nuclear power programmes. It is used in armour-piercing munitions because of its very high density; DU is 1.7 times denser than lead. Its use has a devastating impact on civilians caught up in conflicts across the world.

CND calls on the British government to introduce an immediate moratorium on its use of DU munitions; to support the global ban on the use of DU in conventional weapons; to support the development of obligations to clean up areas where the weapons have been used and to provide assistance for affected communities.

How is it used?
To make nuclear weapons or nuclear fuel, natural uranium is enriched to produce the isotope Uranium-235. The by-product in this process – DU – emits three quarters of the radioactivity of natural uranium and shares many of its other risks and dangers.

DU is used for armour piercing tank rounds and bullets as it is so heavy, meaning it can easily penetrate steel. DU has also been used as a trim weight in aeroplanes because of its heaviness.

Why is there a problem?
When DU munitions hit their target, toxic and radioactive dust can then be inhaled. It is thought that using DU has caused a sharp increase in the incidence rates of some cancers, such as breast cancer and lymphoma, in areas of Iraq where the weapons were used following the wars in 1991 and 2003. It has also been implicated in a rise in birth defects from areas adjacent to the main Gulf War battlefields.

Other health problems associated with DU include kidney failure, nervous system disorders, lung disease and reproductive problems. The lack of reliable data on exposure to uranium, however, means that no large-scale study into its effects exists.

The Ministry of Defence disputes the risks of DU, but recommends ‘ongoing surveillance’ for veterans with embedded DU fragments.

Remnants of DU munitions can also contaminate soil and groundwater and targets struck by DU remain indefinitely contaminated after conflicts. Managing contamination from DU use is technically challenging and expensive and, unlike land mines or cluster munitions, there are currently no obligations on states to address contamination after conflict.

Where have depleted uranium weapons been used and who uses them?
DU weapons were used on a large scale by the United States of America and the United Kingdom in the Gulf area in 1991, and then in Bosnia-Herzegovina in 1995, in Serbia and Kosovo in 1999, and again in the war in Iraq in 2003.They were also used by the US in Syria in 2015.

The legal status of DU weapons
Although no sole treaty explicitly banning the use of DU is yet in force, it is clear that using DU weapons runs counter to the basic rules and principles enshrined in written and customary International Humanitarian Law.

In 2006, the European Parliament strengthened its previous calls for a moratorium by calling for an introduction of a total ban, classifying the use of DU, along with white phosphorus, as inhumane. Belgium became the first country in the world to ban all conventional weapons containing uranium. Costa Rica became the second in 2011, with other states set to follow their example. In addition, the Italian government has elected to offer compensation to Italian veterans affected in Iraq.

Since 2007, repeated UN General Assembly resolutions have highlighted serious concerns over the use of DU weapons. These include a lack of transparency from users over where they have been fired, the costs and technical difficulties in managing contaminations, uncertainties over the environmental behaviour of DU and the ongoing concerns of affected communities. The UK, together with the US, France and Israel are the only states that have consistently voted against the resolutions.

The International Coalition to Ban Uranium Weapons (ICBUW)
Formerly based in Manchester, the ICBUW secretariat has now moved to Berlin. The UK national Campaign Against Depleted Uranium Weapons (CADU), which was also based in Manchester, has now closed and its funds transferred to ICBUW. Research into toxic remnants of war is now being carried out by the Conflict and Environment Observatory (CEOBS), which was established in 2017.

Action needed
The government should introduce an immediate moratorium on its use of DU munitions as well as contribute to more meaningful research into the impact of uranium weapons on civilian populations. It should also support the global ban on the use of DU and make sure it is providing money and resources for affected communities.

The UK should be vigorously involved in international efforts to stop the use of DU, rather than denying the dangers entailed in its use.