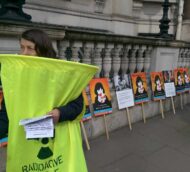 CND remains seriously concerned about the current state of the Fukushima Daiichi power plant in central Japan. The continuing disaster at Fukushima underlines the constant danger that nuclear power presents due to events totally beyond the control of power station operators. CND urges the UK government to reconsider its support for building new nuclear power stations in Britain and instead to invest in truly safe, clean and sustainable forms of energy.

In March 2011, an earthquake and tsunami hit the Fukushima nuclear power plant in Japan. The earthquake caused the reactors at the plant to shut down automatically, activating the emergency generators. But the tsunami which followed the earthquake, estimated at 13-14 metres in height, flooded the basements in which the emergency generators were housed, cutting power to the pumps which circulate cooling water to stop the reactors from over-heating. According to the Carnegie Endowment for International Peace, the Fukushima Daiichi plant would have been overwhelmed even by a tsunami half this size. The company which runs the power plant, the Tokyo Electric Power Company (TEPCO), had built a breakwater to anticipate defence from waves up to four metres in height only.

The four explosions which followed released radioactive materials into the atmosphere in what was the biggest nuclear disaster since the explosion at Chernobyl twenty five years earlier. It is only the second incident ever to be classified as a Level 7, the highest possible, on the International Nuclear Event Scale. An estimated 30,000 square km, 8% of the Japanese landmass, was contaminated by radiation fallout from the disaster.

At the time, a 12-mile compulsory evacuation zone was designated around the plant with those living closest evacuated and others instructed to stay indoors. In the first year alone 170,000 people were ordered to evacuate from their homes. It has still not been deemed safe enough for tens of thousands of people to return to their homes and many of those that remain in upheaval are stigmatised by communities because of the incorrect assumptions about nuclear radiation.

TEPCO has been forced to admit that serious problems remain at the site. Since the meltdown, highly radioactive water has been leaking out to sea, resulting in the Prime Minister ordering the government to step in by partially nationalising the company. The committee reviewing the terms of a government bail-out of Tepco has finalised a proposal to nationalise much of the clean-up effort.

The prospect of water contamination is alarming people both in Japan and internationally, as TEPCO has admitted it tried to keep the extent of leaks and power failures secret. Estimated radiation doses to local people and workers have remained high. Efforts to control this problem have included injecting over 300m3 of water into the reactor cores every day, even more contaminated wastes of which TEPCO still have no means of disposing. The result is that 300 tonnes of radioactively contaminated water is dumped into the sea each day: this is strongly opposed by fishermen. Commercial fishing has been banned near the nuclear complex.

TEPCO estimates the total cost of damages at 13.3 trillion yen (£100 billion), but more recent statistics from the Trade Ministry see this figure rise to 20 trillion yen (£142 billion). The Japanese Board of Audit in March 2015 concluded it would take TEPCO 30 years to repay the financial subsidies of nine trillion yen it has so far received from the government.

Radiation levels have now reached a new high, with recent robots recording figures as high as 650 sieverts per hour; six Sieverts is a fatal dose in most instances. So far, seven robots sent into the reactors have broken down, because their electronic circuits could not withstand the fierce radiation fluxes; with worrying consequences for workers and civilians. In fact, in October 2013, six workers at the plant were doused in radioactive water. In February 2014, around 100 tonnes of highly radioactive water leaked from a storage tank, after a valve was left open by accident.

In 2014, TEPCO has managed to successfully remove the spent fuel rods from the storage pool in Unit 4. However, the rest of the programme continues to languish. New roadmaps suggest the removal of spent fuel for Unit 3 to finish in 2019, while work at Units 2 and 1 is not expected to be done until 2022. This will be over 10 years since the earthquake and tsunami.

In February 2016, three TEPCO executives, Tsunehisa Katsumata, then TEPCO chairman, and two former vice presidents Ichiro Takekuro, and Sakae Muto, were formally charged with professional negligence for their handling of the Fukushima disaster. Their trial opened in June 2017, with each of the defendants pleading not guilty.  The court heard that the defendants had been aware of the risks posed by a massive tsunami since 2009, but had dismissed the possibility.

Campaigners have criticised the World Health Organisation for releasing a 2012 report which hides important information on the health impacts of the Fukushima disaster. It has been claimed that the report underestimates the impact of the radioactive release on those people who were unable to leave the affected area quickly. The report did conclude that people in the area worst affected by the accident have a higher risk of developing diseases: one third of the plant’s workers face an increased risk of developing thyroid cancer, leukaemia and all solid cancers during their lifetimes.

The fallout from the Fukushima disaster continues. Hundreds of thousands of victims in Japan are still denied fair compensation from a regulatory system that allows the nuclear industry to evade its responsibilities and forces the public to pay for its disasters. Despite the Japanese government’s long promise that TEPCO will eventually pay the damages, the government has now admitted that electricity customers will incur a portion of the clean-up costs, through price hikes in their electricity bills.

Of Japan’s 48 nuclear energy reactors, only three are running at present, after the Fukushima disaster brought concerns about nuclear to the forefront. Since the 2012 election victory for pro-nuclear Prime Minister Shinzo Abe and his Liberal Democratic Party, however, the nuclear industry has been gaining ground. A recent victory for the industry at the high court saw an injunction overruled. The injunction had ceased operations at a nuclear plant in Kansai.

In a poll conducted by the Asahi Shimbun newspaper in October 2016, 57% of Japanese voters said they opposed the Prime Minister’s plan to restart the country’s nuclear power plants, with support for resumption dwindling to 29%.

In the aftermath of Fukushima, many countries have started to rethink their position on nuclear power. Switzerland, Germany, Italy and France have all since committed to phasing out nuclear or using less of it.

Switzerland first proposed phasing out nuclear power in 2011, with a public referendum in May 2017 backing this position.

In Germany, there was an almost immediate response to the Fukushima disaster. The government announced it would close all of the country’s nuclear power stations by 2022, with most older plants being decommissioned immediately.

These examples could serve as models for Britain and other countries for how to move to a nuclear-free, low carbon future. If a high-skilled society such as Germany – with a strong industrial safety record – says it can’t justify the risk to its citizens from nuclear power, then Britain should take heed. Germany reached this decision after a serious review of the evidence, whereas the British government has said there is ‘no reason’ for scrapping nuclear power because a tsunami is unlikely here. The disaster at Fukushima tells us is that you cannot predict what could go wrong at a nuclear power plant – an accident, resulting from human error or from a natural disaster could have grave consequences. Indeed, Britain was very lucky during the Windscale accident in 1957: the effects could have been far worse.

Germany and Switzerland look set to ensure their energy security by investing in new technologies. Britain could be doing the same if the government were to take a genuinely open-minded approach to this issue. As it is, we look set to remain dependent on a dirty, dangerous, out-dated technology that, sixty years on, still relies on public subsidies and huge bail outs from the taxpayer when accidents happen.

CND urges the government to reconsider its support for building new nuclear power stations. Over many years, successive governments have attempted to minimise the threats posed by nuclear power plants in order to justify their construction. This is irresponsible behaviour as it puts at risk the lives of hundreds of thousands of people who live near them. It’s vital that the government learns from the continuing disaster at Fukushima.

In June 2017, CND hosted a successful conference to examine why we should stop producing nuclear power and invest in renewables instead. The conference highlighted how renewable energy produced more than half of Britain’s electricity needs for the first time as well as how renewables provide far more employment opportunities.

The UK government should immediately abandon its agreement with EDF to subsidise a new nuclear power station at Hinkley Point C, especially in light of recent confirmation from the company that the project will cost even more than anticipated. The government should also set out a new non-nuclear agenda which builds on and develops the country’s undoubted potential for renewable energy.