The militarisation of space is an increasing concern for peace activists, not least following former US President Donald Trump’s creation of a Space Force. Billions of pounds are being spent by multiple countries on militarising space – on satellites, ground-based stations and new technologies such as armed drones, controlled through satellites. Warfare has become almost totally dependent on space technology.

In 1999, the United Nations General Assembly declared that an annual World Space Week should be held each October. This has been taken up by the Global Network Against Weapons and Nuclear Power in Space (GN) as Keep Space for Peace Week.

As a member of the GN, CND campaigns against both an arms race in outer space and missile defence systems. For years it has been one of our strategic objectives and we have drawn attention to the role played by US bases in the UK in US plans to control and dominate outer space. Recently though things have taken a giant leap in the wrong direction.

When the US Space Force was established in 2020, President Trump said that it marked ‘a big moment’ and that there was ‘going to be a lot of things happening in space. Because space is the world’s newest warfighting domain’. A new generation of space weapons is on the cards. The US has already tested anti-satellite (ASAT) weapons and a Space Force squadron of 20 operators has been stationed in Qatar to work on jamming, hacking and blinding satellites.

Russia, China and India also have extensive military space programmes and tested ASATs and the UK, France, NATO, Japan and South Korea have either established or are working towards their own military space forces. The recent US claim that Russia tested an ASAT by firing a projectile towards one of its own satellites has increased fears.

The possibility of a war in or from space is becoming a huge threat to international security. If a vital satellite should malfunction at a time of international tension and another nation is blamed – the results could be disastrous.

In just a few decades outer space has become of the utmost importance for global commercial, political and military interests. Space is now big business with some forecasters suggesting it could be worth over $1 trillion by 2040.

The government’s Integrated Review of Security, Defence, Development and Foreign Policy, published in March 2021, pledged to ‘make the UK a meaningful actor in space’. A new Space Command was announced, to be launched by summer 2021, as well as an intention for Britain to be able to launch satellites by 2022.

The UK wants to capture 10% of the global space market by 2030. A £30 million military space programme for the development of small satellites was announced in 2020. According to the Ministry of Defence, ‘the programme may eventually see live high-resolution video beamed directly into the cockpit of the RAF’s fighter jet fleet, providing pilots with unprecedented levels of battle awareness’.

Surrey Satellite Technology Limited has already received over £4 million for the development of Carbonite 2, a low-orbit mini-satellite launched in 2018, to provide high-resolution reconnaissance for intelligence-gathering. The government has also awarded grants totalling nearly £40 million to establish the launch of small satellites from UK spaceports in Cardiff, Cornwall and Scotland.

Two planned for Sutherland and the Shetlands, have been marketed as ‘commercial’ developments for launching climate and communications satellites. However, US aerospace giant Lockheed-Martin has received £23.5 million to help with spaceport development and other defence contractors, such as Raytheon and BAE Systems, are involved – a strong indication that there will be military applications.

One of Trump’s many controversial announcements was to direct the Pentagon to develop a Space Force – a new branch of the US military, ‘separate but equal’ to the US Air Force – to ensure ‘American dominance in space’.

The idea of a sixth branch of the US armed forces to deal with space was not new. The US had already spent billions of dollars on militarising space – on satellites, ground-based stations and new technologies such as armed drones, controlled through satellites. The US military (and that of other states) has become almost totally dependent on space technology.

Trump’s missile defence policy also leads us closer to the militarisation of space. The Missile Defence Review details the development of new technologies, including a space-based layer of sensors as part of an enhanced missile defence system.

This escalating militarisation of space is set to put an end to the view of outer space as a ‘global commons’ to be used ‘for the benefit and in the interests of all countries, irrespective of their degree of economic or scientific development’ – as declared in the 1967 Outer Space Treaty (OST).

The OST was initiated by Russia, the US and the UK and has 110 state parties but it looks destined to be another treaty that the US walks away from. There are attempts in the UN to stop all this – every year a resolution calling for ‘International Cooperation in the Peaceful Uses of Outer Space’ is adopted by the General Assembly.

Russia and China introduce an annual resolution on a treaty for the Prevention of an Arms Race in Outer Space. The resolution is overwhelmingly adopted – except by the US who vote against and Israel, who abstain. The US claims the treaty is not needed but others are sceptical and frustrated that no progress can be made until the most powerful space-faring nation agrees.

Progress will therefore be up to us – politicians are too easily persuaded by aerospace giants like Boeing, Lockheed Martin and Raytheon.

Every year, the Global Network against Weapons and Nuclear Power in Space – of which CND is a member – calls a Keep Space for Peace week of actions.

CND will continue to support these weeks of action and will continue to campaign against the militarisation of space. As part of this, we’ll draw attention to the US bases in the UK such as Fylingdales, Menwith Hill and Croughton, that operate as important centres for the US military activities including missile defence and drone wars.

The UK government should work to save and strengthen the Outer Space Treaty and reinstate the concept of space as the province of all humankind. 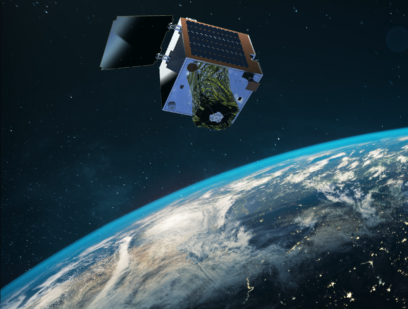 Examining the UK's militarisation of space
Watch back webinar
Your support goes a long way!
Donate
Get the latest updates on our campaign