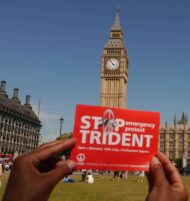 How to lobby your MP on Trident replacement

The basic facts about Trident

Trident is Britain’s nuclear weapons system. It is made up of four nuclear submarines. One of the submarines patrols the seas at all times, with up to eight missiles on board: each missile carries up to five nuclear bombs. The submarines, which came into service in the 1990s, start to reach the end of their service lives in the early 2030s. The government has started the replacement process, following a decision by Parliament in 2016 which gave the final go-ahead to build new submarines. This means that Britain will be nuclear-armed until the 2050s and beyond.

CND campaigns to Stop Trident, with the goal of cancelling the replacement programme.

Position of the political parties

Points to raise with your MP

What you want your MP to do