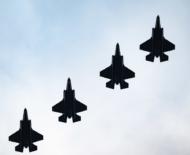 CND condemns any return of United States nuclear weapons to RAF Lakenheath in Suffolk. 110 nuclear bombs were stored at the airbase until they were removed in 2008 following persistent popular protest, and they must not be allowed back.

Response to war
Tensions are rising across Europe amidst the ongoing war in Ukraine. In response to the Russian invasion, reports are circulating that the US is preparing to store some of its nuclear weapons in the UK. This originated with the fact that the US Department of Defense has added the UK to a list of NATO nuclear weapons storage locations in Europe being upgraded under a multimillion-dollar infrastructure programme. The UK was not on the comparable list for the previous year, so this looks like a very recent decision.

Experts now believe the base in question is RAF Lakenheath, located just 100 km from London.

History repeats itself
While it is not yet known if nuclear weapons have already been returned to the base, or if NATO is in the process of preparing the base to be ready to receive them, this development marks a change in the nuclear status of RAF Lakenheath.

RAF Lakenheath hosted US nuclear weapons for more than five decades, first arriving in September 1954. CND arranged protests at the base alongside the Lakenheath Action Group, including days of action where hundreds of people descended on the base. Direct action activists broke into the base and locked on to the gates of the ammunition depot, preventing access for hours. Messages of support were shared between campaigners at other US bases in Europe, and from Faslane, where Britain’s nuclear weapons are stationed. Plays were presented outside the base, and letters handed in to the Commander.

Following years of protesting, the nuclear weapons were eventually removed in 2008, but not before nuclear accidents endangered the safety of the local community.

In 1956 a B-47 bomber on a routine training mission crashed into a storage unit containing nuclear weapons, killing four servicemen. Official US documents declared it was a ‘miracle’ that none of the bombs detonated, and that ‘it is possible that a part of Eastern England would have become a desert’. Five years later, an airplane loaded with a nuclear bomb caught fire following pilot error. The bomb was ‘scorched and blistered’, and scientists later discovered it could have detonated in slightly different circumstances.

Both incidents were covered up by the US and British governments, only being admitted in 1979 and 2003 respectively.

Nuclear-sharing
By the time of the weapons’ removal in 2008, the Lakenheath site had 33 underground storage vaults and stored around 110 B-61 gravity bombs that could be dropped from F-15E warplanes based there.

Lakenheath received the latest nuclear-capable fighter – the F-35A – in 2021 and a total of 24 F-35As are expected to be based there eventually. Training with the latest B61-12 guided nuclear bomb will commence within the year.

Despite being called an RAF station, Lakenheath is run by the United States Air Force (USAF) and currently only hosts USAF units and personnel, leading many campaigners to describe it as USAF Lakenheath. The host wing is the 48th Fighter Wing (48 FW), also known as the Liberty Wing, assigned to United States Air Forces in Europe – Air Forces Africa (USAFE-AFAFRICA). The wing operates the F-15C/D Eagle, F-15E Strike Eagle and F-35A Lightning II. With around 6,000 personnel on the base, it is the largest deployment of USAF personnel in Britain.

US nuclear weapons based here would make the UK once again a forward nuclear base for the US. Approximately 150 American B-61 nuclear gravity bombs are already currently stationed in five countries in Europe: Belgium, Germany, the Netherlands, Italy and Turkey.

The nuclear sharing arrangement is part of NATO defence policy. In peace time, the nuclear weapons stored in non-nuclear countries are guarded by US forces, with a dual code system activated in a time of war. Both host country and the US would then need to approve the use of the weapons, which would be launched on the former’s airplanes.

There is strong opposition to these weapons being sited in Europe, including from some of the host nation governments. Germany, Belgium and the Netherlands have all, unsuccessfully, called for the removal of US nuclear weapons from their countries.

Dangerous and destabilising
Should the UK be hosting or preparing to host US nuclear weapons, this would constitute a further undermining of our safety, and prospects for global peace. The US is the only country to locate its nuclear weapons outside its own borders and this major increase in NATO’s capacity to wage nuclear war in Europe is dangerously destabilising. Their return will increase global tensions and put Britain on the front line in a NATO/Russia war.

Resist
The big question is whether the nuclear bombs have already been returned to Britain, or if their delivery is still in preparation. Either way this is a huge challenge for the peace movement and CND will do everything we can to prevent these weapons being sited here. Millions mobilised across Europe against the imposition of cruise and Pershing missiles in the 1980s. We got rid of all those weapons then, and we have to have the energy, the commitment and the confidence to do that again. 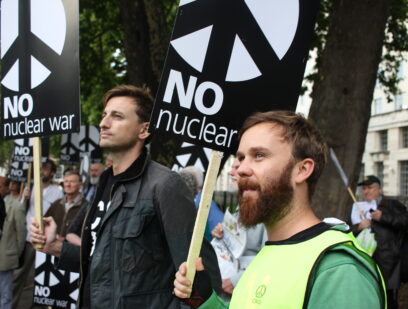 Contact your MP
It's easier thank you think
Your support goes a long way!
Donate
Get the latest updates on our campaign
Manage Cookie Consent
To provide the best experiences, we use technologies like cookies to store and/or access device information. Consenting to these technologies will allow us to process data such as browsing behaviour or unique IDs on this site. Not consenting or withdrawing consent, may adversely affect certain features and functions.
Manage options Manage services Manage vendors Read more about these purposes
View preferences
{title} {title} {title}