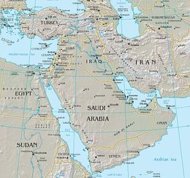 Weapons of mass destruction-free zone in the Middle East

As tensions continue to mount in the region, so does the need for a weapons of mass destruction (WMD) free zone in the Middle East. Almost half a century after such a zone was first proposed, the need is as urgent as ever. The disastrous civil war in Syria rages on, foreign military intervention in Iraq and Libya has resulted in upheaval and further violence, tensions between the US and Iran are at an almost all-time high and there is no settlement in sight to the conflict between Israel and Palestine. CND actively supports the establishment of a WMD-free zone, which should be seen as an increasingly important step in the struggle to achieve the peaceful settlement of disputes in the region.

Introduction
Five nuclear weapons free zones covering groups of countries have been recognised by the United Nations since the 1960s. These are geographical areas which have signed agreements banning the use, development or deployment of nuclear weapons on their territory. 115 countries are included in these zones, which are Latin America/Caribbean, the South Pacific, the ASEAN region, Central Asia and Africa. Mongolia is also an UN-recognised nuclear-free zone. Similar agreements have established Nuclear-Weapon Free Areas in the Antarctic, on the Sea-Bed and in Outer Space. Nuclear Weapons-Free Zones are highly successful forms of collective security across large parts of the world, including almost the entire southern hemisphere.

Middle East
There has been discussion on establishing a nuclear weapons-free Middle East since Egypt and Iran tabled a UN General Assembly resolution calling for this in 1974, but progress has been almost imperceptible. In 1990, the scope was extended to cover all weapons of mass destruction due to the growing concerns about chemical and biological weapons.

The 2010 nuclear Non-Proliferation Treaty (NPT) Review Conference highlighted the need for negotiations towards a WMD-free zone. The conference’s final document identified five steps necessary to achieving the goal of establishing a WMD-free zone in the Middle East, including convening a conference and appointing a facilitator. But a planned conference due to be held in Finland in 2012 was postponed indefinitely by the United States, citing ‘present conditions in the Middle East’.

The 2015 NPT Review Conference ended without a final text, mainly due to the fact that no agreement could be reached on a WMD-free zone in the Middle East. The initiative continued to be discussed at NPT preparatory committee meetings ahead of the 2020 Review Conference.

The UN General Assembly mandated a conference to take place in 2019, with the Jordanian Ambassador to the UN chairing. All the countries in the region were invited to participate, as were the five officially recognised nuclear states. China, France, Russia and the United Kingdom attended, along with 22 states from the region, but the United States and Israel stayed away. The political declaration following the conference did not announce anything new, but it is promising that this process is taking place. It is now up to Israel, as the only nuclear power in the region, and the United States to support this initiative and attend the next time.

The conference will meet again in November 2020.

The creation of these regional forums has encouraged cooperation between countries and possible threats have been transferred into agreements on maintaining peace.

Obstacles to Peace
There are of course significant obstacles to overcome before a similar zone can be established in the Middle East. Talks have been ongoing for decades but with no concrete results, due to deep-rooted disagreements between some countries in the region. Hostility between Israel and Palestine continues, with faltering progress on a two-state solution. Israel is the only country in the region to possess nuclear weapons. Although the government does not confirm or deny this fact and has not signed the NPT, it is estimated that they have 90 nuclear weapons. Many Arab states do not recognise Israel, which is a major obstacle to securing a region-wide agreement.

After the assassination of Iran’s top military commander Qasem Soleimani by a US drone attack in January, the nuclear deal signed in 2015 is looking vulnerable. The Joint Comprehensive Plan of Action (JCPOA) set limits on Iran’s nuclear activities in return for an easing of sanctions. But the US withdrawing in 2018, followed by the re-imposition of sanctions and the targeted killing of one of Iran’s top officials has caused deep tension.

The civil war in Syria has contributed to the instability of the region. Since 2011 the fighting has divided loyalties in the region, for example Iran is backing Syrian president al-Assad while Saudi Arabia’s King Abdullah became the first Arab head of state to condemn him and his government’s actions. And deep problems remain in Iraq, a country which has been economically and physically devastated by the US-led war and occupation.

Another complicating factor is that Turkey hosts US nuclear weapons on its territory.

Security
Overcoming these significant obstacles will require a lot of diplomatic work. But the benefits to the Middle East and the rest of the world would be huge. Nuclear weapons are horrific weapons of mass destruction that threaten the lives of millions. Steps towards ensuring this most volatile of regions is free of all weapons of mass destruction must surely be a priority for the international community.

Policymakers and the public in the region would do well to look to the African and Latin American examples. They demonstrate how regional security can be far more effectively achieved through co-operative, transparent and rigorously verified security frameworks.

Every country in the region apart from one has signed the NPT, a positive start in establishing a WMD-free zone.

Conclusion
CND calls on the British government to promote sustained and sincere dialogue without preconditions between the countries of the region. The UK should take more effective measures in UN and NPT forums to promote a WMD-free zone.