What would the verdict be if President Truman were put on trial for the atomic-bombing of Hiroshima and Nagasaki? How would you act if you were a world leader during a nuclear weapons crisis? What would your pressure group focus on?

CND Peace Education – the Campaign for Nuclear Disarmament’s education programme – engages thousands of school students across England with questions like these each year.

We aim to empower students with knowledge on the hugely important – and controversial – issues of nuclear weapons and peace, so they can make up their own mind. We encourage critical thinking through creative and collaborative learning methods such as role-play, spectrum activities, group presentations, and origami. At the same time, we are helping students to develop skills such as discussion and empathy.

We offer free, cross-curricular workshops and an assembly, catering to Years 3 to 13. We also have five free teaching packs, thousands of which are downloaded or requested as hard copies annually. Our sessions and teaching packs are very relevant to numerous subjects, including: Citizenship, RE, History, English, and Physics, as well as helping meet SMSC and Prevent requirements. They are all highly regarded by teachers and students alike: see https://cnduk.org/education/testimonials/ for testimonials! 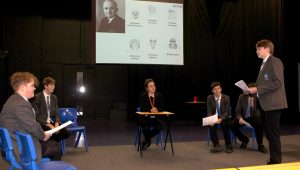 The importance of peace and nuclear weapons education, and its relevance to Citizenship

In 2008 the UN Committee on the Rights of the Child called on the UK Government to make peace education, ‘a fundamental subject in the education system’. Peace education can range from the international level to the interpersonal and inner level: from exploring nuclear weapons debates to practicing non-violent conflict resolution and mindfulness. CND Peace Education focuses on the former, but we hope that the methods that we encourage students to adopt help their interpersonal and personal growth.

Nuclear weapons education specifically is extremely important. The UN strongly advocates nuclear disarmament and non-proliferation education on the grounds that (in the words of then-Secretary-General Ban Ki-moon in 2016), ‘It is important to bring the discussion of these critical issues to schools in all countries to inform and empower young people to become agents of peace’.

Nuclear weapons have also been one of the most prominent topics in the media in the last few years. Many students have some knowledge of the issue, particularly regarding shifting relations between the USA and North Korea. However, students’ understanding often lacks nuance and detail. CND Peace Education’s classroom activities help provide that additional information and allow students to grapple with some of the complexity of the subject in an accessible way. 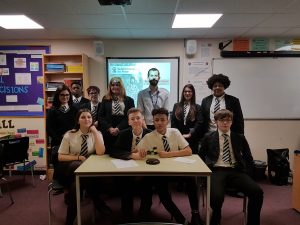 Citizenship is one of the subjects that our sessions and resources link to most strongly. This is partly through the skills that we help students develop (including core Citizenship skills such as interrogating evidence, evaluating viewpoints, and presenting reasoned arguments), but also through the content of the activities:

Book us for your school, and get our teaching resources!

To book us for a free workshop at your school, or to download/request our free teaching resources, go to www.cnduk.org/education.

Tweets by CNDPeaceEd
Your support goes a long way!
Donate
Get the latest updates on our campaign