As part of Global Disarmament Week, the Hereford Peace Council is travelling from the Hope/Chester/Wrexham area across North and South Wales to collect your petitions and letters demanding that the UK signs up to the UN Treaty on the Prohibition of Nuclear Weapons (TPNW). The group, joined by Dr Rebecca Johnston – co founder of ICAN (The International Campaign to Abolish Nuclear Weapons), will then continue the journey on to London to personally deliver these letters to the House of Commons.

Once 50 states have ratified it, the TPNW will come into force. States party to the treaty prohibit the developing, testing, producing, manufacturing, transferring, possessing, stockpiling, using or threatening to use nuclear weapons.

Despite stating that it is in favour of multilateral nuclear disarmament – the exact thing that this treaty represents – the UK has so far refused to sign the treaty, unlike many other countries.

So to get peace back on track, join the Peace Train to call the UK government to get rid of our nuclear weapons!

Whether you want to join Hereford Peace Council in boarding the train, contribute a letter or petition, or simply wave hello from the platform – all are welcome to attend this peace train campaign. 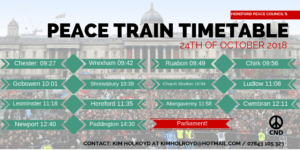 Most locations on the Peace Train route will be hosting on-platform events approximately half an hour before the train is due to arrive. Feel free to attend and hand over your petitions! Please make sure to hand over any letters or petitions before the train departs so we can efficiently board them on to the train.

There will also be a parallel Peace Train support event at Hope (Flintshire) train station for the 8:12am train for those that cannot make it to Chester.

For more information on how to participate in the Peace Train campaign, see our Peace Train info. 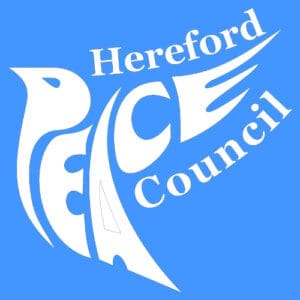 For further enquiries please contact Kim Holroyd of the Hereford Peace Council at: kimholroyd@hotmail.com or 07843 105 323.