“1981 was the year I decided to join up with the CND (Campaign for Nuclear Disarmament). I’d already been involved with them locally after somebody had found a secret bunker in the Mendip Hills which was guarded by soldiers with guns. Everyone was very worried about that; it was all top secret, but we wanted to know what was going on in our area, so we formed a local CND group in Shepton. Emily (Michael’s daughter) being born in 1979 also had a lot to do with me getting involved with the CND. I felt a great need to protect her, because she was so tiny. She really made me think, ‘I’m not going to let her get blown up by a cruise missile!’

So when it came to the 1981 Festival, I called up Bruce Kent, the CND’s general secretary who was always in the papers, and asked if they’d like to be involved. At the time our image was slightly shabby and I wasn’t totally sure the Festival was going to work. We were still losing money and the whole event hadn’t really caught on with paying customers, but I thought the CND could help.

Bruce said he liked the sound of me and invited me up to their offices in Seven Sisters Road, London to meet him. The idea was that they’d help promote us and we’d give them the proceeds and rename it the Glastonbury CND Festival. I was a bit nervous, but he said, ‘No, I love it, Michael! We’re pleased to be a part of it. I’m with you, whatever you want to do.’ I walked away thinking, ‘Oh, thank God for that!’

They had this enormous mailing list with 350,000 people on it – a fantastic target audience of the kind of people who’d be interested in the Festival – and they let us put flyers in the envelopes for free, as long as it didn’t go over the weight for the stamp. So a few weeks later, I just turned up at Castle Cary station with boxes of flyers, put them in the goods vans on the London train, and left the rest up to the CND. Now, with their help, we were getting incredible nationwide publicity for nothing, at a time when we still weren’t very well known. It was of huge value for us. The whole success of the Festival was actually down to that, I think. 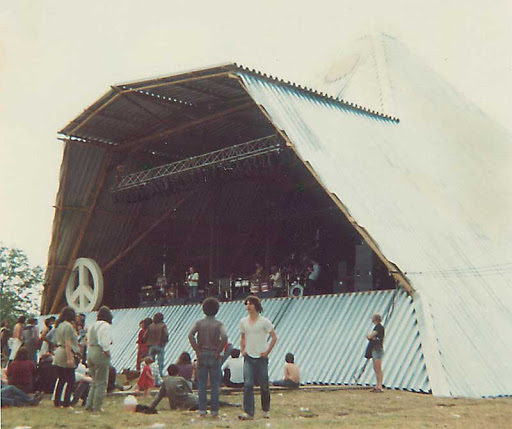 That year’s Festival did really well. Thanks to the publicity we got through the CND, we suddenly had people coming down from Manchester, London, Liverpool, Cardiff, Glasgow and all over the place.”

It’s a relationship that continues to this day.