As the years passed, CND became more involved in organising the festival, staffing the gates and the information stalls, organising press and advertising.

David Sears went to all of the Glastonbury CND Festivals: “It was my holiday every year. Monday to Monday, rain or shine, always camped in the same place. Cows in the main stage field to greet me, Michael would come round with milk for our tea. An important time in my life supporting one of the greatest causes. Thank you Worthy Farm and CND.” Here is a photo David took one year: 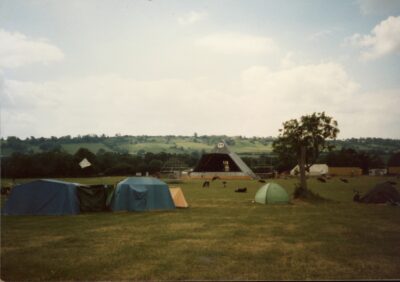 Another festival-goer, Dave Walkling, took this photo another year: 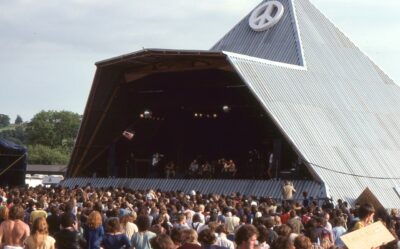 1982 was the first year the CND logo appeared on top of the Pyramid Stage, where it remained throughout the decade. Michael Eavis explains in the book ‘Glastonbury 50: The Official Story of Glastonbury Festival’: “From the 1982 Festival we got a schoolmaster in nearby Evercreech to make a huge CND sign for the top of the Pyramid Stage. But one morning I went down to get the cows in at about half past five and it had gone! I thought I’d gone mad. I went out on a motorbike to look for it and eventually found it after some of the crew had ripped it off and rolled it away.”

The CND logo most recently featured on the Pyramid Stage in 2022: 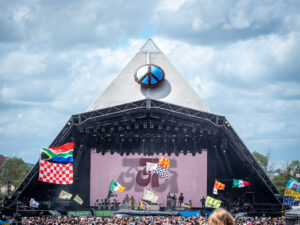