CND supporter Lucy Rutherford had a rather special involvement with the 1984 festival.

“In 1984 we were involved with the new CND hot air balloon, training people to fly it and flying with it at public events.

“On June 23rd 1984 we were at Glastonbury with the balloon to overfly the show ground in the early morning.  (In summer, flights in balloons can only be made early or late because of thermal activity.) We flew on the 23rd and 24th, landing locally, after about an hour’s flight in each case.

“In 1985 we went again, and I think it was on this occasion Michael Eavis or a member of the family had a flight and took photos over the site which helped to win his argument that the site was legally within its boundaries and allowed them to renew the licence for the event.

“My husband, Martin Hutchins, was one of the pilots who helped train other pilots, and as lifelong members we really enjoyed our involvement with the balloon.”

There are still photos of this balloon dotted around the festival to this day. 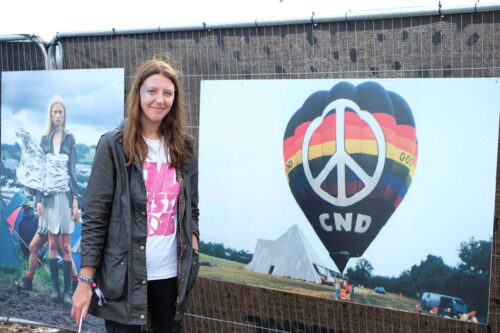