Jim Taggart, a stalwart of Scottish CND and CND UK, died at his son Peter’s home on 14 June, aged 83, after a short period of ill health. A committed socialist and internationalist, he was a fervent campaigner against nuclear weapons, NATO and war. 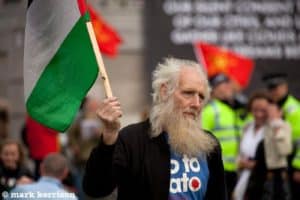 Jim’s family home in Dumbartonshire overlooked Gare Loch, at the heart of Faslane Naval Base which houses the Trident submarines. Unsurprisingly, Jim became an active supporter of the Faslane Peace Camp from its inception in 1982 and of Trident Ploughshares which began blockading in the late 1990s.

He served on Scottish CND Executive over three decades, first as the Labour CND representative, then as Treasurer, and later as a committee member. Jim served too on CND National Council, as a representative of Scottish CND and as a directly elected member.

A gentle and peaceable man, Jim Taggart trained as a botanist in Glasgow University and lectured for a time on plant classification at Trinity College Dublin. After returning to Dunbartonshire, in the 1970s he developed a botanic garden which became internationally known. He will be missed by his many friends in CND and across the peace, anti-war and labour movements.

Why does CND oppose NATO?
Find out more in our briefing
Your support goes a long way!
Donate
Get the latest updates on our campaign
Manage Cookie Consent
To provide the best experiences, we use technologies like cookies to store and/or access device information. Consenting to these technologies will allow us to process data such as browsing behaviour or unique IDs on this site. Not consenting or withdrawing consent, may adversely affect certain features and functions.
Manage options Manage services Manage vendors Read more about these purposes
View preferences
{title} {title} {title}