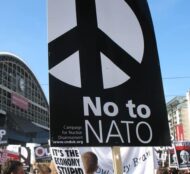 The North Atlantic Treaty Organisation (NATO) is a nuclear-armed military alliance which is an obstacle to a peaceful world and global nuclear disarmament. It currently comprises 30 member states, including the United Kingdom. NATO was first established during the Cold War, and since its inception has expanded both its sphere of influence and the scope of its activity, destabilising international relationships as it does so. The war in Ukraine, which NATO expansion did much to provoke, has led to substantially increased NATO activity in Europe, alongside an increased presence in the Asia-Pacific region and across other parts of the world. The danger is that the alliance’s military build-up and expansionism actually increases the risk of war, making us all less safe.

How the alliance developed

NATO was founded in 1949, in the early years of the Cold War, by Belgium, Canada, Denmark, France, Iceland, Italy, Luxembourg, the Netherlands, Norway, Portugal, the UK and the USA. The Warsaw Pact was established in response by the then Soviet Union and its allies in 1955. In the 1950s, Greece, Turkey and West Germany joined NATO, followed by Spain in 1982. At the end of the Cold War, the Warsaw Pact was dissolved, but NATO was not. Rather than scaling back its global military presence, the US moved to fill the positions vacated by its previous rival. As the countries of eastern Europe embraced free market economics and multiparty democracy, the US moved rapidly to integrate them into its sphere of influence via NATO. This would prove to be an effective strategy, as witnessed by the support of those countries for the US-led invasion of Iraq in 2003.

The 1990s saw NATO developing its regional cooperation forums and inviting new members to join the alliance. In March 1999, Hungary, Poland and the Czech Republic were all admitted as full members. Ten days later they found themselves at war with their neighbour Yugoslavia, as part of NATO’s illegal bombing campaign. But developments at that time were not limited to expanding its membership. At NATO’s fiftieth anniversary conference in Washington in 1999, a new ‘Strategic Concept’ was adopted. This moved beyond NATO’s previous defensive role to include ‘out of area’ – in other words offensive – operations, anywhere on the Eurasian landmass.

Estonia, Latvia, Lithuania, Slovenia, Slovakia, Bulgaria and Romania were admitted to NATO in 2004 – not only former Warsaw Pact members, but also former Soviet republics in the case of the Baltic states. In 2009, Albania and Croatia became members with Montenegro joining in 2017. North Macedonia was confirmed as the newest member in 2020, while Bosnia and Herzegovina is also in negotiations to join the alliance. This scale of expansion has contributed to international tension as Russia sees itself increasingly surrounded by US and NATO bases. In the past few years, NATO has exacerbated the situation by encouraging Ukrainian membership and announcing new bases in eastern Europe.

Since Russia’s invasion of Ukraine, Kiev has formally informed NATO it wishes to join the alliance, as have Finland and Sweden. The latter two have completed accession talks, and are now waiting for individual NATO member states to approve their inclusion.

NATO is a nuclear-armed alliance and around 150 US B61 nuclear bombs have been stationed in five countries across Europe – Belgium, Germany, the Netherlands, Italy and Turkey – for years. And now, in a shocking development, it looks like US nuclear weapons are coming to Britain and will be located at RAF Lakenheath in Suffolk. While no official announcement was made by the UK government, the US Department of Defense has added the UK to a list of NATO nuclear weapons storage locations in Europe being upgraded under a multi-million dollar infrastructure programme.

CND has a strong track record of removing nuclear weapons from Britain as a result of popular protest, and will continue to campaign against this latest development. In the 1980s, mass mobilisation led to the removal of US cruise missiles. In 2008, sustained protests by CND and local groups led to the removal of US free-fall nuclear bombs from Lakenheath.

NATO has continually attacked the Treaty on the Prohibition of Nuclear Weapons (TPNW), an agreement banning nuclear weapons that is supported by most of the world’s countries. Rather than following the path pursued through the TPNW, of recognising that nuclear weapons are so dangerous they must be outlawed, NATO has clearly decided that these weapons are so dangerous that we must have a lot more.

Out of area activity

The US drive for global domination through military influence was most notable in Afghanistan. NATO assumed control of the International Security Assistance Force (ISAF) in Afghanistan in 2003, marking NATO’s first deployment outside Europe or North America. NATO only withdrew its troops from Afghanistan in 2021.

Elsewhere in the Middle East, NATO agreed to expand its anti-ISIS training mission in Iraq in 2021 – a decision taken even though the country’s Parliament voted in 2020 in favour of demanding that foreign troops leave.

NATO has also undertaken operations in Libya and the Horn of Africa over the last decade.

NATO has even declared space ‘an operational domain’, extending the reach of the alliance still further. In its 2021 summit, the alliance extended the Article 5 collective defence clause to include space attacks.

NATO unveiled a new Strategic Concept at its 2022 summit meeting, setting NATO’s evolving global development in the context of the war in Ukraine. While the long-term orientation towards a military build-up in the Asia-Pacific region to counter China continues, there is an intensification of focus on Russia and eastern Europe in particular, including a substantial increase in military forces in the latter. Significant stress is laid on Article 5 of the NATO treaty, which provides for collective defence – an attack on one is an attack on all. Taken together with an escalating militarization across our societies, the summit outcomes indicate a deepening preparation for major war, in Europe or beyond.

Nowhere is this more worryingly spelled out than in NATO’s new Chemical, Biological, Radiological and Nuclear (CBRN) Defence Policy, published alongside the new Strategic Concept. This underpins NATO’s ‘defence and deterrence’ posture and states that ‘Allies will have all the appropriate tools to ensure that potential adversaries do not perceive that they can gain a clear advantage against NATO by using, or threatening to use, CBRN materials.’

The 2014 summit declared that a cyber-attack on any NATO member could warrant a collective response, expanding the scope of circumstances under which military action could be authorised. This is particularly worrying because of the difficulty in determining the source of cyber-attacks and technical evidence of them is rarely shared or clarified.

NATO members recently announced the alliance would be ‘stepping up the fight against terrorism’.

There seems no doubt that there is a long-term plan for maintaining and extending NATO’s global influence.

The rebalancing of US foreign policy towards Asia launched by former US President Obama has undoubtedly shaped NATO policy too, raising tensions and helping to militarise the Asia-Pacific region, a part of the world with four nuclear weapon states – India, Pakistan, China and North Korea.

NATO published a new report in 2020, designed to strengthen the ‘political’ dimension of the alliance. ‘NATO 2030: united for a New Era’ talks about the need to adapt with the times and address emerging and disruptive technologies.

The stress on unity and political cohesion brings the document to its chief concern: how to maintain western dominance in a world where China is rising economically? NATO’s answer is to expand its orientation to the Asia Pacific, to deal with the ‘impact’ of the emerging China. The report itself says that NATO should treat China as a ‘full-spectrum systemic rival, rather than a purely economic player’. Much of the report’s content has shaped the 2022 Strategic Concept.

NATO and Colombia concluded a partnership agreement in 2018, ‘with a view to strengthening dialogue and cooperation to address security challenges’. This despite the fact that the Latin American states and the Caribbean are a Nuclear Weapon Free Zone under the Tlatelolco Treaty, agreed in 1967.

There has been angry rejection of the NATO agreement from some of Colombia’s neighbours, with Venezuela accusing Colombia of inviting ‘external factors with nuclear capability to gain a foothold’.

NATO expects its members to spend 2% of national income on defence every year. NATO should not be in a position to impose spending guidelines on independent nations, which should be determining their own funding priorities based on genuine need.

Nine NATO countries met this target in 2022, including the UK.

CND believes that a vital step towards global nuclear disarmament would be achieved with the removal of all US nuclear weapons from European bases, including a firm commitment not to base them at RAF Lakenheath. Britain should withdraw from NATO, and all foreign military bases on British soil should be closed.

Working to prevent war with Russia and China remains a strong focus for our work. The UK should be opting for diplomatic solutions to complex political problems, not participating in an alliance that is backing Russia and China into a corner through military expansionism. This will not help stop a war, instead the danger is it will start one.

NATO should not be expanded but rather disbanded and the influence, resources and funding of the Organisation for Security and Co-operation in Europe (OSCE) extended towards a nuclear-free, less militarised and therefore more secure Europe. CND will continue to work towards a different security order based on dialogue, cooperation, disarmament, common and human security. This is not only desirable, but necessary if we want to preserve the planet from threats and challenges posed by nuclear weapons, climate change and poverty.

Why does CND oppose NATO?
Find out more in our briefing
Your support goes a long way!
Donate
Get the latest updates on our campaign