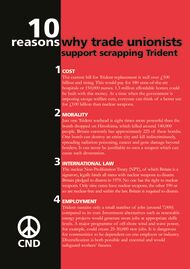 To order physical copies of this leaflet, please click here.

1. Cost
The current bill for Trident replacement is well over £100 billion and rising. This would pay for 180 state-of-the-art hospitals or 150,000 nurses. 1.5 million affordable homes could be built with this money. At a time when the government is imposing savage welfare cuts, everyone can think of a better use for £100 billion than nuclear weapons.

2. Morality
Just one Trident warhead is eight times more powerful than the bomb dropped on Hiroshima, which killed around 140,000 people. Britain currently has approximately 225 of these bombs. One bomb can destroy an entire city and kill indiscriminately, spreading radiation poisoning, cancer and gene damage beyond borders. It can never be justifiable to own a weapons which can cause such devastation.

4. Employment
Trident sustains only a small number of jobs (around 7,000) compared to its cost. Investment alternatives such as renewable energy projects would generate more jobs at appropriate skills levels. A major programme of off-shore wind and wave power, for example, could create 25-30,000 new jobs. It is dangerous for communities to be dependent on one employer or industry. Diversification is both possible and essential and would safeguard workers’ futures.

5. Safety
Nuclear warheads, containing plutonium and other deadly radioactive materials, are regularly transported on the roads from Berkshire to Scotland. Each lorry carries up to 8kg of plutonium; any accident involving an explosion or fire could lead to a radioactive plume spreading for miles, poisoning a huge area for thousands of years.

6. Environment
There is no safe storage solution for nuclear waste. Large volumes of highly radioactive, lethally toxic waste will remain a danger for hundreds of thousands of years. Recent research shows that even a so-called ‘small exchange’ of 50 nuclear weapons could cause the largest climate change in recorded human history, resulting in mass famine.

7. Military irrelevance
Senior military figures have spoken out against Trident and its replacement, stating that nuclear weapons do not meet Britain’s security needs. Resources should instead be invested in addressing actual contemporary threats, such as terrorism and cyber warfare.

8. Humanitarian response
The International Red Cross has stated that the global humanitarian community would never be able to effectively respond to the aftermath of a nuclear conflict, as too many medical facilities would be destroyed and personnel killed.

9. Democracy
Democracy polls show that the majority of people in this country are against Trident replacement. There is particularly strong support in Scotland, where Trident is based. The SNP, standing on an anti-Trident platform, won almost all of the Scottish seats in the last General Election.

10. Disarmament is possible
South Africa dismantled its nuclear arsenal entirely between 1989 and 1993. Ukraine, Kazakhstan and Belarus gave up their nuclear weapons following the break-up of the Soviet Union. There are nuclear weapons-free zones in Latin America and the Caribbean, the South Pacific, Southeast Asia, Africa and Central Asia. 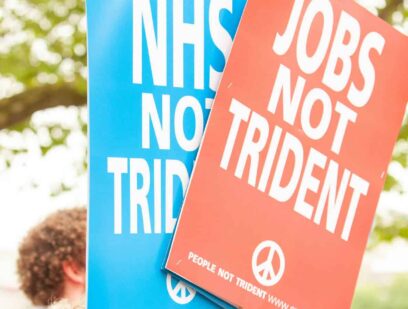