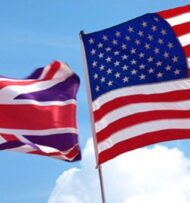 Trident: The US connection

The British government likes to tell us that Trident is an independent nuclear weapons system. The reality is, however, that it is entirely dependent on the United States – both technically and politically.

The US and the UK signed the Mutual Defence Agreement (MDA) in 1958, a bilateral treaty on nuclear weapons cooperation under which both countries agreed to exchange classified information to develop their respective nuclear weapon systems. The relevant part of the MDA is reviewed and renewed every ten years, most recently in 2014 where the process took place with no parliamentary debate or scrutiny. The treaty permits ‘the transfer between the United States and the United Kingdom of classified information concerning atomic weapons; nuclear technology and controlled nuclear information; material and equipment for the development of defence plans; training of personnel; evaluation of potential enemy capability; development of delivery systems; and the research, development, and design of military reactors’.

As a result of this treaty, the UK’s nuclear weapons system is highly reliant on the US. The system comprises three components: the submarines, the missiles and the warheads. The Trident missiles give their name to the system as a whole. These missiles are leased from the US, and the submarines have to return regularly to the US base in King’s Bay, Georgia, for the maintenance and replacement of the missiles. The UK pays an annual contribution of £12 million towards the cost of this base.

While the Vanguard-class submarines are made in the UK – at the Barrow-in-Furness shipyard in Cumbria – many aspects of the design are based on US nuclear submarines. Additionally, many of the system’s components are bought from the US. The gas reservoirs of the warheads are likely produced in the US, and are certainly filled with tritium there. The body shell, which contains the warhead, is purchased from the US; and the guidance system used by the Trident system is designed and made by Charles Stark Draper Laboratories, also in the US.

The site at which the UK’s nuclear warheads are made, the Atomic Weapons Establishment at Aldermaston, is part-managed by Lockheed Martin, a US corporation. The missiles were tested under US supervision at Cape Canaveral, off the coast of Florida.

It emerged in January 2017 that the US government may have even asked the UK government to cover up a failed nuclear missile test, denying British elected representatives the chance to scrutinise the viability of the nuclear weapons system.

As well as being technically dependent on the US, Trident is also far from being politically independent.  It has been assigned to the US-dominated NATO since the 1960s, meaning Trident could be used against a country attacking another NATO member state. Since NATO has not adopted a no-first-use policy, it could also be used pre-emptively against another country that was perceived to be a threat.

Furthermore, it is inconceivable that the UK would ever use Trident without the prior approval of the US. The Defence Select Committee recently concluded, in fact, that ‘the only way that Britain is ever likely to use Trident is to give legitimacy to a US nuclear attack by participating in it’. Not only this, but ‘in a crisis the very existence of the UK Trident system might make it difficult for a UK prime minister to refuse a request by the US president to participate in an attack’.

Trident is reliant on the US. Without approval from Washington, the UK could not use its nuclear weapons system.