CND supporters celebrated in 2021 when the Treaty on the Prohibition of Nuclear Weapons (TPNW) entered into force. Now we’re launching a campaign to get Britain involved with the agreement so it can take steps to join the global majority in support of a nuclear weapons-free world.

The states parties to the TPNW will meet for the first time in Vienna between 21st-23rd June, 2022. As a non-signatory, the UK can attend as an observer, but it is refusing to do so.

Help us put pressure on the Foreign Secretary to commit to attending, like other NATO states Norway and Germany. 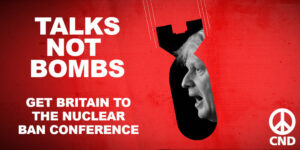 CND has produced this digital toolkit to help you campaign online. With graphics you can use on social media and actions to take, it has everything you need to join the campaign from home.

The Foreign Secretary is responsible for making decisions on international treaties and should be the UK government’s representative at the conference.

Use our tool to write to Liz Truss, the Foreign Secretary, to call on the government to attend the event in Vienna.

CND will also be presenting a formal letter to the Foreign Office calling on the UK to attend.

Order this poster to display it in your window, or on street stalls – let’s spread the word about the conference.

You can also print out this poster if you prefer.

Do you want to find out more about why the conference is taking place and how the UK government can participate? Download this fact sheet about the event.

CND hosted a webinar with the President of the conference, Alexander Kmentt. Watch back to find out his thoughts on the need to get Britain – and other nuclear-armed states – to attend.