On the 6th of August 1945, the world witnessed the first use of nuclear weapons during war. To commemorate those affected in Hiroshima, we share the story of Joseph Rotblat – CND founding member and Nobel laureate – who, despite working on nuclear weapons research, rigorously opposed the bomb’s use and devoted his life to promoting peace. 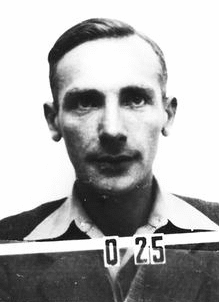 Originally from Poland, Rotblat narrowly avoided the Second World War by pursuing a fellowship in nuclear physics at Liverpool University. Leaving Poland just days before it was invaded by Nazi Germany, he was cut off from his wife Tola, who was murdered in the Holocaust.

Rotblat joined Britain’s atomic bomb project, Tube Alloys, and then in 1944 the Manhattan Project, which developed the first nuclear weapons. Rotblat wanted to prevent the use of atomic bombs by Nazi Germany, believing British nuclear weapons were the only effective deterrent. But Rotblat later came to see the whole idea of “deterrence” as “flawed”. “For a start, it won’t work with unreasonable people, and even reasonable people behave irrationally in war, especially if they face defeat,” Rotblat said.

By the end of the year, when it had become clear that Germany’s nuclear weapons research would be fruitless, Rotblat left the Manhattan Project — the only scientist to have abandoned it on moral grounds.

The atomic bombings of Hiroshima and Nagasaki were a pivotal moment in Rotblat’s life. He hosted public lectures demanding a moratorium on all atomic research. “It came as a terrible shock. My idea had been to make the bomb to prevent it being used, and here it had been used immediately after it was made, and against civilian populations.” He spent five years attempting to make nuclear weapons possible, and the rest of his 96-year-long life campaigning to stop them.

The distinguished physicist was determined to use his research for peaceful ends, and studied the effects of radiation on living organisms. He showed that hydrogen bombs were highly radioactive and carcinogenic. In doing so, he aligned himself with the fallout victims of Castle Bravo at Bikini Atoll — a huge US H-bomb test — and showed that radiation levels were far higher than officially reported.

Rotblat firmly believed in personal moral responsibility and founded the British Atomic Scientists Association in 1946, saying that “scientists have to realise that what we are doing has an impact not only on the life of every individual, but also on the whole destiny of humankind.” The organisation opposed the military use of nuclear power and sought to raise public awareness and debate.

In 1958, Rotblat became a founding member of CND and the Pugwash Conference, a politically neutral organisation that allowed scholars and public figures to collaborate toward reducing global security threats, particularly relating to nuclear warfare.

It is impossible to overstate the contributions of Joseph Rotblat — his work was credited by former US defence secretary Robert McNamara as forming the basis of the negotiations that ended the Vietnam War, and Mikhail Gorbachev admitted his influence on the thawing of the Cold War. In his Nobel acceptance speech in 1995, Rotblat urged: “We appeal, as human beings, to human beings: Remember your humanity and forget the rest.”

Joseph Rotblat is an extraordinary example of the power of conscientious objection and informal diplomacy, especially at a time when trust in international institutions and treaties seems to be waning. Rotblat told the Guardian in 2003: “The short-term objective is the elimination of nuclear weapons; the long-term objective is the elimination of war altogether. As the years have gone on, my hopes of seeing the long-term goal have gone, and now I’m not sure that I will see the short-term goal either. But other people will take up the fight.”

We celebrate Rotblat’s commitment to nuclear disarmament, and we are determined to continue fighting for humanity’s freedom from the destruction visited upon Hiroshima and Nagasaki.