Thank you to everyone who attended CND Conference this year. Below you can find the results of our AGM & Policy Conference, and a recording of our No New Nuclear Arms Race public conference with invited speakers from around the world.

In our morning session we discussed the global impact of the UK’s illegal nuclear arsenal increase. Will the 40% increase in nuclear warheads lead to a new arms race? Will it increase the risk of nuclear war? We were very happy to have with us Professor Paul Rogers from the UK; Vijay Prashad from the Tricontinental Institute in India and across the Global South; Colonel Ann Wright from Veterans for Peace in the US; and Ruth Rohde from the Arms Information Centre in Freiburg, Germany. CND’s Tom Unterrainer chaired the session.

In the afternoon, we turned our attentions to Britain and the TPNW as it is the time to acknowledge past wrongs. With the TPNW now in force, Britain needs to take a long look at the legacy of its nuclear weapons testing, how it can remediate that, and what it must do to sign up to the TPNW. We were pleased to be joined by Talei Luscia Mangioni, a campaigner for a Nuclear-Free and Independent Pacific; Rebecca Johnson, who has worked extensively on the UK and TPNW compliance; and Alan Owen, from Labrats, campaigning with nuclear test veterans. Chaired by CND General Secretary Kate Hudson. 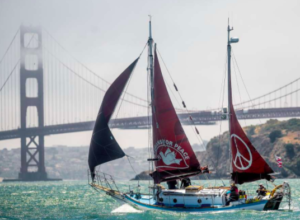 Rebecca’s slides on the TPNW used at CND Conference can be found here, and below is information about Greenham 40th anniversary webinars on nuclear colonialism, disarmament, treaties and peace-building that took place in August and September 2021.

LABRATS and the LABRATS Academy. You can email Alan Owen for any matters on info@labrats.international.

Thank you to all CND members and groups who attended this year’s AGM and Policy Conference on Saturday 16 October.

The slides of Kate Hudson’s Campaigns Presentation are available here.

The following resolutions were passed by CND Conference 2021:

In March this year, the government published its Integrated Review of Security, Defence, Development and Foreign Policy. The Review projects and promotes a post-Brexit ‘Global Britain’ that is on the offensive, ‘projecting force’ globally. It includes a major announcement on nuclear weapons, increasing the UK’s nuclear arsenal from the current approximately 195 warheads to 260.

This reverses the decision by the coalition government in 2010 to begin the process of reducing the arsenal to 180. This will end three decades of gradual reductions in the UK’s nuclear arsenal. It is at odds with the renewal of the New START treaty by Presidents Biden and Putin earlier this year which continues bilateral nuclear weapons reductions by the two countries. It has led to observations that the UK is starting a new nuclear arms race.

The Integrated Review also includes a change in nuclear use posture — now reserving the right to use nuclear weapons not only against nuclear threats but against supposedly comparable threats, such as chemical and biological weapons or ‘emerging technologies’; potential nuclear targets also now include non-nuclear weapons states that are said to be heading in the direction of acquiring nuclear weapons — or, those states judged to be ‘in material breach of [their] non-proliferation obligations.’ This is easily understood as a thinly veiled reference to Iran.

Conference is aware that AUKUS:

Conference is further aware that:

Conference notes with grave concern the Trades Union Congress’ September 2021 pledge to support and actively campaign for “the construction of new nuclear plants… and the development of Small Modular Reactors.” Conference rejects the TUC conclusion that a balanced energy mix includes nuclear power.

Conference recognises that, despite promises of a “green jobs bonanza” in Scotland, that employment in Scotland’s low-carbon and renewable energy economy fell from 23,200 in 2014 to 21,400 in 2019.

Conference further notes the tripartite AUKUS military pact is supported by only a minority of UK Labour Party affiliated unions, but as an opportunity for job creation.

Conference commends all regions, branches, and activists for their success so far and urges all regions to lead on this work over the coming year.

Conference believes the TPNW becoming international law represents an unparalleled opportunity to galvanise public support, and the support of the local leaders who represent it, in favour of the UK becoming a signatory to the treaty. Conference further believes that by asking their local council to pass a resolution to this effect or by asking their MP, councillor, or faith leader to make a pledge supporting this position, activists and supporters take practical action at a local level to help create the necessary conditions to make this a reality. These actions also empower local activists to act in concert opening the possibility that new local CND groups might form in their wake.

Conference notes that the nuclear powers continuously break both the spirit and intent of the Nuclear Non-Proliferation Treaty (NPT) by updating existing weapons systems and introducing new weapons systems. However, they always claim that their actions are within the rules of the treaty and give assurances that they remain committed to its aspirations.

The UK government’s proposals, contained in the Integrated Review, for a 40% increase in the number of nuclear warheads is different. It is a deliberate breach of the NPT which, if left to stand, could result in others following suit and a rapid collapse of the Treaty.

Hopefully the Review Conference in 2022 will censure the UK but that is not enough. We must demonstrate the British people’s commitment to the principles and aspirations of NPT by building an all-party alliance strong enough to force the government to withdraw its outrageous proposals.

Conference resolves that CND, nationally and locally and in addition to independent campaigning, must approach all parties requesting their support and commitment to the principles of the NPT. By these measures we should be able to build a movement capable of forcing a U-turn on the government.

Proposed by Reigate and Redhill CND

Conference resolves to continue to work collaboratively with Scottish CND, highlighting the squandering of the UK’s resources on nuclear weapons at a time when continued austerity risk increasing inequalities, harming the most vulnerable and detracting from appropriate responses to the climate emergency by sustaining the threat of global destruction through nuclear catastrophe.

Resolution 8: Space militarisation and the UK