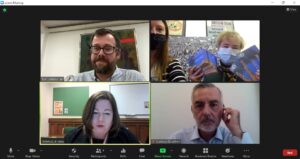 The UK government announced earlier in the year it will increase Britain’s nuclear arsenal by over 40% – a legal opinion by CND has confirmed that this puts Britain in breach of the nuclear Non-Proliferation Treaty (NPT) which it signed in 1968.

CND supporters backed the campaign to report the UK to the UN. And we were delighted to present the legal opinion and the signatures of the many thousands of supporters to the President of the upcoming NPT Review Conference – a crucial UN summit to discuss the treaty.

Ambassador Gustavo Zlauvinen congratulated CND on our work and emphasised the importance of grassroots campaigning like ours to secure international nuclear disarmament. The Ambassador had read the legal opinion, and in a very fruitful meeting, we discussed ways forward for our mutual aim of achieving a world without nuclear weapons.

The campaign doesn’t stop here and CND is now working on the next steps in the NPT process to make sure the UK is held to account for its actions.

Urge your MP to help prevent a nuclear war
Contact your MP
Your support goes a long way!
Donate
Get the latest updates on our campaign